My uncle was energetic, intense, self-confident, and passionate about golf. In western New York, lake-effect snows might blanket local courses anytime between November and May, but my uncle believed that the golf season should start when spring did. Each year he declared he would be golfing again come April first, ignored comments from family and friends that area courses would still be snow-covered, and pretended—or behaved as if he believed—that winter would move out of the way when it was time for golfing to resume. 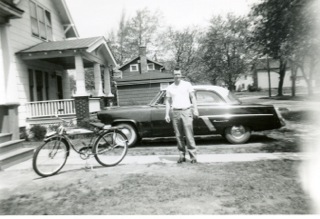 My uncle chuckled, said those boys needed a driving lesson, and pushed his foot on the accelerator.”

By the end of March he’d start checking out the county golf courses. Hoping to recruit his teenaged nephew to the game, one day he took me with him to look over conditions at a course on the east side of the county. The back road we traveled was narrow, bumpy, with no shoulder to speak of, and passed through barely inhabited farmland and fallow fields. It hadn’t snowed recently, but the course was still mostly covered with dingy crystalline snow; open patches of fairway were few and scattered. We walked around some, my uncle estimating how soon the course would be snow-free and the groundskeepers could get it ready for play. He was cheered by his prospects. Then we began to retrace our way home, taking that back road again.

We were in my uncle’s Mercury, the one with the winged messenger god on the hood. As my uncle joked and fantasized about getting on that golf course soon, I noticed him paying particular attention to the rear view mirror. I could hear a car coming up behind us. Suddenly it roared past, two boys my age or older in the front seat. Once beyond us, the boy driving cut back into our lane too quickly. It was a thoughtless, careless maneuver, an immature driver misjudging distance and ignoring safety checks in his mirrors. Had his judgment been worse, his rear end would have clipped the front of our car. In a few seconds, his greater speed put more distance between us and I couldn’t tell if he’d realized how close we’d been.

My uncle chuckled, said those boys needed a driving lesson, and pushed his foot down on the accelerator. I felt myself thrust against my seatback, my feet instinctively braced against the floor. We gained on them rapidly. The teenager started to speed up but we closed in on their car until our front bumper was barely a foot or two away from their rear bumper. The boy stepped harder on the gas pedal and so did my uncle. We hurtled down the narrow two-lane, inches apart, at 60, 70, 80 miles an hour. The fields along the road were a blur, the boys in the car ahead glancing frantically around and behind them, my uncle smiling ferociously, my gaze alternately on him and on the car close ahead. I was terrified, speechless, certain that the four of us would crash.

Suddenly my uncle slowed slightly, whipped the Merc’ into the passing lane, shot past the other car at nearly 90, then swerved close in front of them, and rapidly decelerated. He laughed as they braked and fell behind us, saying how uncomfortable it must be to drive with your pants full, and guessing the boys would pass other cars more politely from now on. He was happy. He’d done a kind of civic service, he thought, taught them a valuable lesson.

My pants were not full but I’d had a lesson too. We’d never met another vehicle on that road but I didn’t believe we should have counted on that. Had someone been ahead of the boys or if the boy driving had panicked and swerved, there would have been deaths, perhaps the boys’, perhaps a third party’s, perhaps our own. I remembered the smile on my uncle’s face, the terror on the boys’ faces. Our lives had been at risk and I had none of my uncle’s confidence that the risk was always in his control.

My uncle, on the other hand, was in good spirits all the way home. He was certain that in a week or so he’d be on this road again and he’d be playing golf again by the first of April. For him, it had been a very good day.

Robert Root is the author of the essay collections Postscripts: Retrospections on Time and Place and Limited Sight Distance: Essays for Airwaves, the memoir Happenstance, and other books. He teaches creative nonfiction in the MFA Program in Creative Writing at Ashland University. His website can be reached here.

One thought on “The Driving Lesson”