It was the summer of the Carnival of Death. It was also the summer my brown baby boy learned to battle the blue jays. 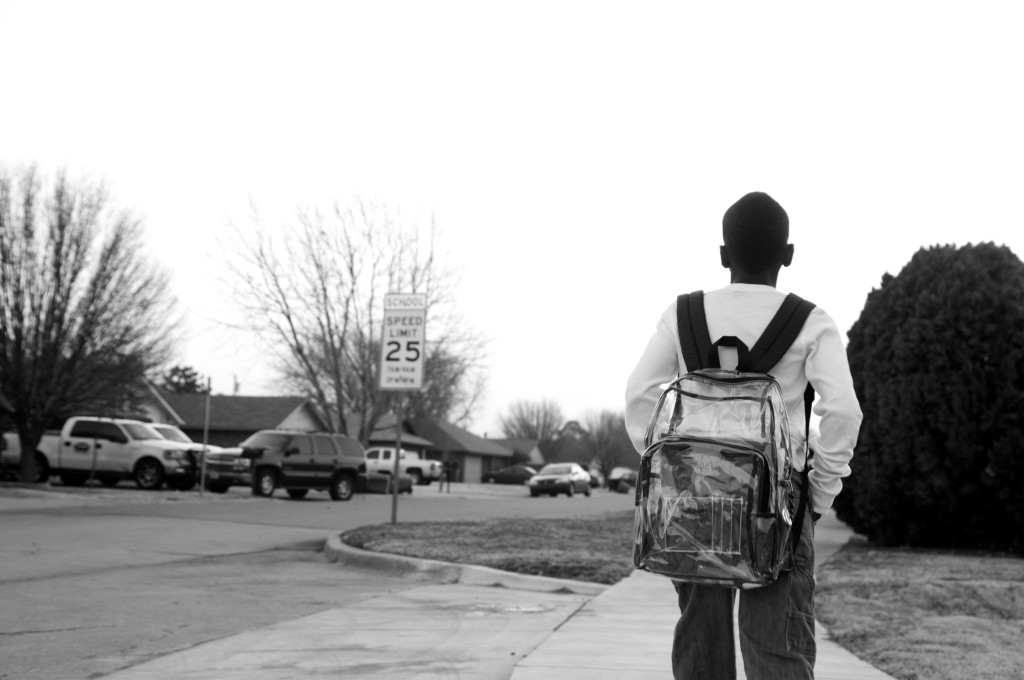 It’s not you, it’s them,” I told him. “They are birds. It’s their nature… If you don’t want to continue going through the back door of your own house for the rest of your life, you are going to learn how to deal with them.”

At first we were excited when we saw them building a nest in our crabapple tree. They were beautiful with their perky crest, powder blue and white feathers and black jacket. But then we noticed that one in particular had become increasingly more aggressive towards my son. Getting into the house had become difficult as Mr. Blue Jay (as we came to call him) would dive bomb my son. Asher wondered what he had done wrong to deserve these attacks.

“Mama, why the bluebirds always picking on me?” he asked.

“It’s not you, it’s them,” I told him. “They are birds. It’s their nature. They are territorial. If you don’t want to continue going through the back door of your own house for the rest of your life you are going to learn how to deal with them.”

Over the summer I had watched him learn to battle the blue jays. He would observe them in the crabapple tree from his seat in the car and when they weren’t looking he would make a run for it. He had learned to be on alert and to watch what colors he wore. He became faster and more precise as he aimed for the door.

When middle school started, I became a mama hen protecting her nest. I did so in the hope of increasing his chances of survival. At 12 he does what boys his age do. What I fear most is the world’s perception of him as a young black male living in America and how that negative perception unravels when law enforcement becomes involved.

I am a lagniappe of a cautionary tale. A song of songs. I guide my son, instruct him on how to address the police if he is ever stopped. As he turned his head and looked directly at me, his mahogany eyes gleaming, he gave me the most beautiful two-dimpled smile.

Shaking his head slowly from side to side, he said awkwardly, “Mama, I am just a kid. I don’t have to worry about that!” For a brief moment I questioned myself. Then I recalled that his voice has deepened and so, in sing-song voice I said, “Yes, you do and yes, you will.”

In the summer break of my first year in college, I encountered the police for a minor traffic violation. I had driven my father down south to the home of his youth in Deland, Florida. The police stopped us. I felt it wasn’t a legal stop because my father’s fuzz buster did not go off – there was no radar on us.

When my father realized my intent was to explain in detail to the officer that I hadn’t been speeding, he said with force, “Shut the fuck up. We in the south.” That conversation took place in the same amount of time it took the officer to get out of his car and walk to my window. I did exactly what my father told me to do. I shut the fuck up.

We never discussed it. However, I had become keenly aware that these incidents were not just happening in the South. They were everywhere and in every type of neighborhood and I wasn’t able to control it. From the television news reports I have become familiar with the different cases. There was Trayvon Martin and then there was Rumain Brisborn, and Tamir Rice and Akai Gurley, and then Kajime Powell and Ezell Ford and Dante Parker and Michael Brown and then John Crawford, Tyree Woodson, Eric Garner, Victor White III , and then there was McKenzie Cochran and Jordan Baker and Yvette Smith. We had our local cases too: Jeremy Lake, Michael Harris and Luis Rodriguez. I imagined the collective cries of their mothers were like the great voice heard in Ramah. I could hear them in my soul. Mourning and great weeping. Rachel would not be comforted. I recall the image that I had seen in Jet magazine of Maime Till at her walnut-colored baby’s funeral. She could not be comforted. Michael’s father could not be consoled, either. I cannot allow my son, my pride and joy, to be caught off guard. He has to know how to respond.

So the morning of the first day of middle school, Asher brought me a cup of coffee and we stood by the front door to have this conversation.

Exasperated he said, “I thought since Martin Luther King died we didn’t have to worry about this anymore. Why do we even celebrate his birthday?”

I said, “Boy, you better act right.” And then drilling him with scenarios with police officers, I said, “How do you address a police officer?”

He waved his hand as though he saw an imaginary officer coming towards him, smiled sweetly and said, “I say, “Hello Mr. Officer. “ I said, “Son, they might not think you are as cute as I think you are. Emmett Till was a prankster too.”

He cast his eyes downward and said, “I say, ‘Hello Officer.” I saw the light dim in his eyes. His innocence slipping away. If only I had happy thoughts and pixie dust. I wanted the light to return to his eyes. Oh dear God, please bring back the light in my brown boy’s eyes.

I asked, “What if the officer is a woman?”

“Good job,” I said as I see a little light return. It is just a small spark and then I asked, “What if the officer asks where you have been?”

He said, “I would say, Officer, I would like to speak to an attorney.”

“No son. You have no money to pay an attorney and you are a minor. You get a message to me or your father and as quickly as you can, we will take care of it from there.” I cannot bear to tell him about Kalief Browder.

“You ask to speak with your parents. You got it?”

“What if they say you are under arrest?”

He looked at me.

Shaking my head, I said, “Son, that is not putting your hands over your head. The officer might think you are not complying with the law.”

“Mama, it just seems to me that when you put your hands up, they just shoot you anyway.”

Hopelessness is a bitter pill to swallow. It is unbearable with tepid black coffee. I question the extent that I must go to prove to the world that my son is not a thug.

I watched as he closed the door and headed for the school bus.

Gay Pasley is an award winning community leader and photographic artist, whose work is featured in the most recent edition of Loud Zoo at Bedlam Publishing.  She is a graduate student at the Oklahoma City Red- Earth MFA Program and this is her first published essay. For more about Gay, go to http://gaypasley.com. Photo by Gay Pasley.

19 thoughts on “First Day of School”