My nephew and I are on the carpet in his room. His olive-green plastic toy soldiers are lined up against mine. He has nine with their long guns at ready. 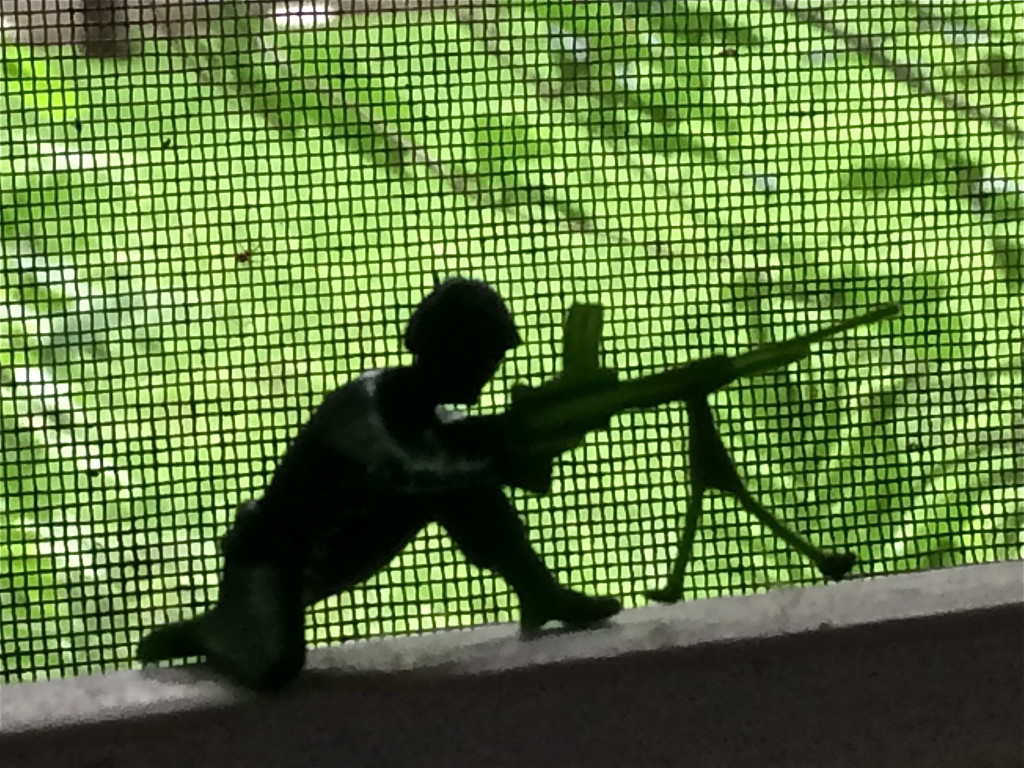 “Maybe this war is over,” he says, “but want to play again tomorrow?”

Well not exactly ready. The guns are pointed up towards the wall. I have fourteen soldiers, all in the same stance, their guns at the same angle. In between our two armies is a jumble of small toy cars of all makes and colors, piled up high. If one of our troops shot his rifle, he would hit the cars but not the opposing army.

“What’s going on?” I ask Adam.  “Is this war? My army is sure to win this battle because I have fourteen soldiers and you only have nine.”

While Adam and I talk, my soldiers are waiting for the go-ahead from their sergeant. In the meantime, Adam is reaching into the box that contains more plastic soldiers. He grabs four that are crouching and sets them in front of his line of troops. Then he grabs seven running soldiers and places them on either side of his battle line. After his grab, he has twenty soldiers and there are none left in the box to join either army in this war.

Adam says, “Who will win this war now?  My army is much bigger than yours.”

Adam and I talked about strategy before we started this game. I told him that strategy is a plan for how to win a war and requires thinking before taking action. I said that sometimes a smaller army can win over a larger army by using strategy. I said, “Each soldier might not start moving or shooting or running until he knows where his army-buddies are going and whether their actions will make them win the war.”

Three of his soldiers with their long guns are now climbing on the cars and my soldiers’ guns are angled upward, aiming right at his men.

“Bang, bang, bang,” I say as I knock them down. Two more soldiers climb the barricade and get shot.  I push them down along with some of the cars.

“Five are dead,” I say.  “Now what?” I challenge him.  A few more cars topple over and the car-barricade is not as high.

His running soldiers move around to the side of the barricade.

All is quiet for a moment.  I say, “Let’s count our troops.” He has eleven. I have ten.

The barricade is now about even with the crouching soldiers.  Our armies face each other straight on. Adam pushes his army towards mine. I push my army towards his and moveable guns fall out of the soldiers’ stiff arms.

All that is left is a pile of soldiers, scattered guns and a few cars. “Now for the hand-to-hand combat,” I say.  Except we can’t tell which soldier belongs to whose army.

Just like that we leave the war front. Later, after lunch, we line up the cars by color and size. We return the soldiers to their box and the war is over.

“Maybe this war is over,” he says, “but want to play again tomorrow?”

Now in his thirties, he is a researcher at an organization whose mission is to protect refugees, advocate for victims of torture, and defend persecuted minorities. Military generals are on the organization’s board.

When I visit my sister, I sleep in Adam’s childhood bedroom. I always check out the books from the college classes he took on war. And I think, if only the books described war as ancient history. If only war could be a game, played on the carpet in a child’s bedroom and could be resolved before lunch.

Betsy Fuchs is the author of the prayer memoir Pulling the Pieces into Prayer: And Bringing Their Blessings into a Jewish Life (or Any Life) and features prose poetry, photography and other writing experiments at her blog, http://betsywblog.blogspot.com/.