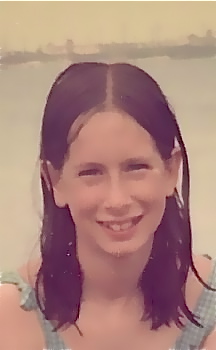 This is a photograph taken of me at 13, just a few months after a terrible car accident left the mother who was driving me home from school, paralyzed, her eldest daughter to a long series of knee surgeries and her youngest, my friend and schoolmate, in a coma from which she blessedly awoke.

I was lucky. I just lost my front tooth which was reimplanted by my dentist after we found it intact in my blue canvas book bag.

But I also lost my voice. It was the early 70s and we just didn’t talk about scary stuff like that back then.

It wasn’t until I saw my classmate several decades later, at our 20th high school reunion, that the memories of the accident were reconjured and I began to write about it for the first time. Then all I did was write. As a journal entry, a newspaper column, a radio essay, long-form memoir, short story, shorter form memoir, a poem, an even shorter essay and then, finally, a story for the stage. Memory so wants to remember.

All that writing generated an enormous amount of pages and some serious writing practice and has become the well I draw from when I teach. But perhaps even more importantly, those drafts and those hours gifted me with emotional and spiritual healing … and my voice.

You can read about that writing journey here in the Fall 2015 issue of Medill Magazine (pages 26-27.)

And if you live in the Chicago area, you can hear me tell the story, using the voice that was silenced so many years ago, at the October Story Sessions show at The City Winery on October 18th, 2015. I’ll be letting you know more about that show as details become available.