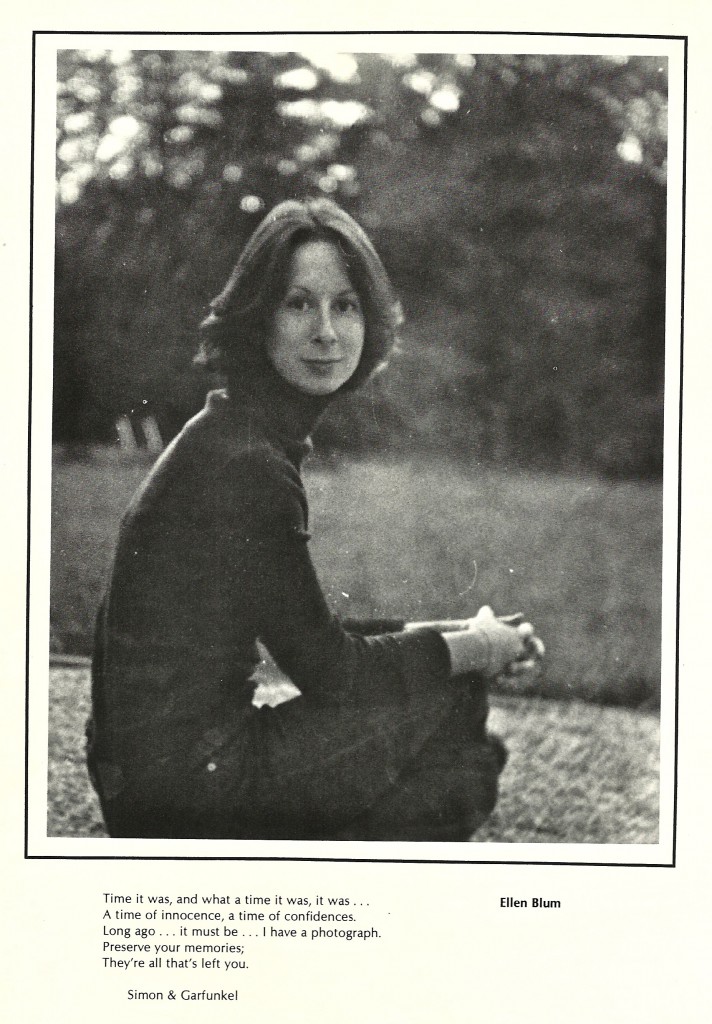 My body is occupying space in 2017, but my mind is deeply entrenched in the 1970s right now.

I’ve just returned from a weekend of events commemorating forty years since graduating high school. I’ve been to a few reunions over the years, but this was the first time I did it all: The picnic lunch in the gym. The campus tour. Dinner with my two best friends from high school. Another with a classmate I haven’t seen in twenty years. Two house parties; one that included classmates bursting into four-part harmonic choral music from their days in the choir, and the other that got everyone dancing to 70s song hits.

For the first time, I bought a t-shirt with my school’s name on the front.

I was really feeling it.

Ours was a small Quaker school, just 70 in my graduating class, which allowed each of us to have our own page in the yearbook for photos and a quote. The British sketch comedians of Monty Python’s Flying Circus were big in 1977 – the year we graduated – and we borrowed their catchphrase “And now for something completely different” for our yearbook theme. What amazing time capsules can be found in the combination of our clothes and hairstyles, along with quotes from the lyrics of Stevie Wonder, Gil Scott Heron, Earth Wind and Fire, Yes, Emerson Lake and Palmer, Cat Stevens, Jimi Hendrix and Moody Blues tunes.

My quote was from Simon and Garfunkel’s “Bookends.” At just over one minute, it’s still one of my favorite songs, ever. I didn’t see it then, but the words of the song are a really interesting portent of my lifelong interest in writing, memory and photography.

Time it was
And what a time it was, it was
A time of innocence
A time of confidences

Long ago it must be
I have a photograph
Preserve your memories
They’re all that’s left you.

Five years after we graduated, there was a reunion, but the only thing I remember thinking is that not enough time had passed; the event still felt like high school.

I didn’t make to the tenth, but I managed the twentieth. I recall it vividly for a conversation that reconnected me with a classmate and stirred a distressing childhood memory which overpowered the reuniting.

At the 30th, the focus was bittersweet when we gathered in the Meetinghouse to remember a classmate who died.

The 40th was the first of our reunions which, for me, was all about the pure joy of reconnecting. To see how we have grown beyond our yearbook photo and that angsted-over quote to become multi-dimensional people with interesting jobs and professions, husbands, wives, partners, children, as well as express the strength and character carved into us from divorce, loss and health issues.

How often are you with people who remember when sticky cake mix flew everywhere in the kitchen that day when you decided to clean the mixing beaters by turning them on high? Or who remember where you were when you first heard Deep Purple’s “Smoke on the Water”? Or who can recall that party that got out of hand when one of our classmates walked, drunk, into the sliding glass door and, thankfully, lived to tell about it? Or who not only remember your parents, but also your grandparents and great-grandmother?

Only people you knew then could know the you who was forming before our resumes and jobs and life shape-shifted us. It’s easy to forget – and dismiss – how imprinted we are by these experiences and these people.

Beyond the glee in seeing so many classmates, revisiting the place where I spent so much formative time – walking down that front hall again, into the classrooms and the library and the auditorium and the gym where so many character-making, micro-events occurred – was its own reward.

We are all part of a circle of people, whether it’s from a neighborhood, camp, religious group or workplace or school. A friend of mine regularly goes to a reunion of people with whom she went to kindergarten!

And there’s a gift waiting for us, there. 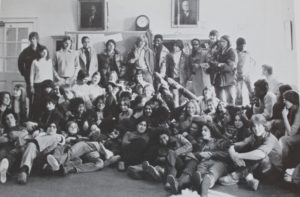 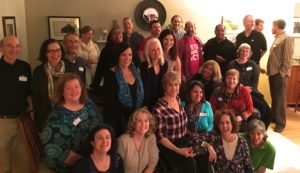 Top photo courtesy from our yearbook, 1977.

Photo from 2017 reunion taken on my iphone, photographer unknown.