Recently, I had to face the fact that a ring I wear all the time could no longer be twisted or soaped enough to fit over my arthritic knuckle. Since this was no ordinary ring, it took me some time to let it go to an expert for resizing.

The ring was my father’s. He wore it all the time; I never saw his hand without it. I know that he had it well before his marriage. Since my uncle wore a similar one, I assume that, in their upper class, professional world of the 1930’s, a high quality, distinctive ring was a marker of a young man’s launch into adulthood. 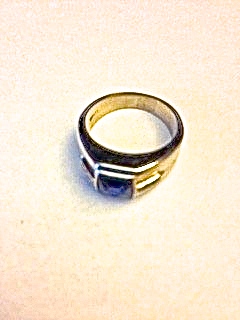 I choose to believe that this ring has absorbed creative energy from each of the hands it has served.”

My father, a lawyer by profession, was also devoted to public service, literature, and opera. He never talked about his own ring, but he wrote an essay about the role of rings in myth, history, and literature:

He explained how rings were signs of power, as in a king’s signet, and also of servitude, as in the Prometheus legend.  A wedding ring might be seen as a symbol of love or of subjugation. Rings were key elements in many of Shakespeare’s plots, both charming romances and dark manipulations. Wagner and Tolkien, both probably channeling Norse legend, saw the ring as a source of corrupting and cataclysmic power. But my father’s favorite writer on the subject was Robert Browning who, in his poem “The Ring and the Book,” compared the base metal in a ring with pure facts, while the gold alloy represented the imaginative insights of the poet. For Browning, and perhaps for my father, the ring was a symbol of the creative process itself.

My father could always find ways to share his knowledge and his methodical, disciplined mind.  I remember the day I reported that, while roller skating, I had found a dime on the sidewalk.  He was glad I was happy, but did I think it was right to take money that happened to be there?

I can still see his brow furrowing.

“Always?”  The wisest defense my seven-year-old self could come up with was “finders keepers.”  That’s the rule, right?

I still thought it was okay. So he raised the ante. Five dollars?  A hundred? At what point would I feel that keeping it wouldn’t be right?  He invited me to imagine how important lost money might have been to someone. Probably not this dime, but how do I know?  What else might I have done? To this day, I am unlikely to take things I find, and even less likely to accept a slogan about much of anything. I hear my father’s voice. “But on the other hand.” And I hear his integrity. “This could matter. Do what’s right.”

On Halloween the year I was six, my older brother had some fun party to go to, so Dad took me out for my own trick or treating.  I was a witch that year.  I came down the steps from the first house I visited and saw displeasure on Dad’s face.

“Perhaps not,” he said thoughtfully, “but you have to.” This was worrisome.

“Do I have to say ‘please’?” He wasn’t ready for that one. He took what seemed like an eternity to make his ruling. At last, with a regretful sigh, he told me that, no, I didn’t have to say “Trick or Treat please,” but I most definitely did have to say ”thank you.“ I still do.

When my father died, my mother offered the ring to me. I took it home, tried it on, and immediately saw it on my father’s hand.  I couldn’t wear it. My mother soon noticed and asked about it.

“If you can’t wear it,” she said, “bring it back to me, because I can.” I did. Two days later, a home burglary took everything from my jewelry box. But the ring was safely on my mother’s finger, where it stayed for the next seven years.

My mother did not share Dad’s even and judicious temperament. Intuitive and elegant, she chose people and decors with quick and discerning judgment. She took pride in her individuality, speed, and perfectionism. Scrupulously polite and charming in public, she expressed sharp criticisms in private. People she saw as “dull,” “unattractive,” or, perhaps worst of all, “conventional” were to be avoided. At the same time, she was passionately enthusiastic about particular people, all animals, and excellence in all forms of art. Within her chosen circle, she was boundlessly generous and loyal.

Being my mother’s daughter was not always easy. Much as I yearned to please her, I rarely did. I was not endowed with her charm or taste, and my efforts in the world, while admirable in her view, did not achieve the scale or status that she could recognize as significant. But much of that changed in her later years. Her judgments softened and I came to appreciate the depth of her musings and the talents she had never been able to claim.

As she wore the ring throughout her final years, she knew that one day it would come to me and that, in time, I, too, would become able to wear it. When I found it on her nightstand the day after she died, I took it without reservation and have worn it regularly ever since.

I have now reached the age my mother was on the day she asked me to return the ring to her. It has become my turn to welcome it back, resized and polished, to my changing hand and life. Now I think about the day when it will move on to someone else — someone who did not know my parents and may not have known me. Supported by my ever-rational father’s love of Browning’s poetic imagination, I choose to believe that this ring has absorbed creative energy from each of the hands it has served.  Wherever it goes, may it always carry my father’s reason, calm, and fairness; my mother’s enthusiasm, discernment, and individuality; and perhaps some of my drive to remember and preserve.

Helen Sloss Luey, a retired social worker, is a community volunteer in San Francisco. She has published in Reform Judaism, Aging Today, Western States Jewish History, and in social work journals. The quotation is from “Rings” in Frank H. Sloss’s book, Only On Monday.

5 thoughts on “A Ring Over Time”