I had been the only English-speaking tenant in my building for almost five years when my New York story happened.

I remember that day in early spring when I walked to my tiny rent-controlled apartment in Chinatown to find two men standing rigidly, like posed mannequins on the stoop, on either side of the giant orange gate that served as the door to our building. No one ever hung out on those steps, so I knew they were cops of some kind even though they were in plain clothes. I now understand how the TV cops on reruns of Law & Order always get “made” by street punks and seasoned criminals. 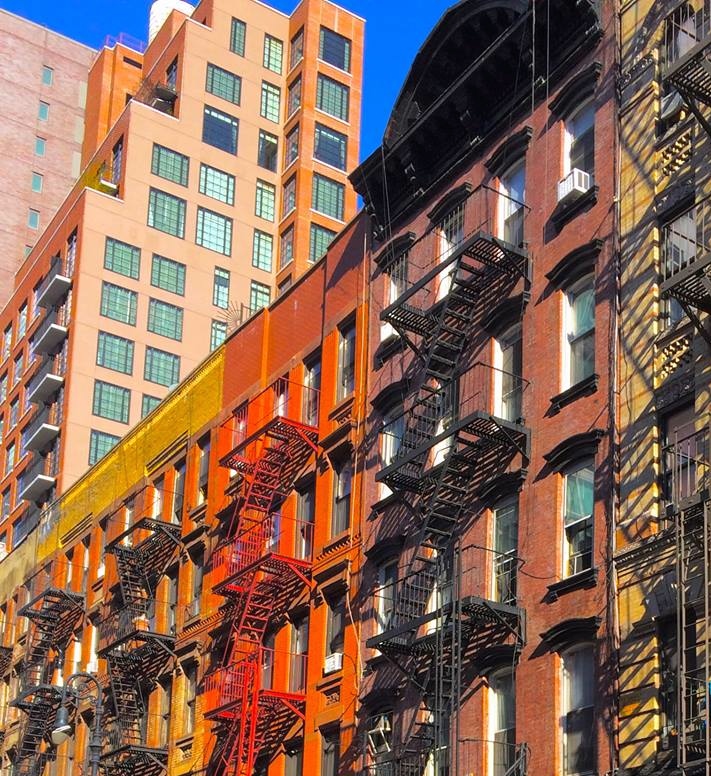 It was true. My building was like a ghost town. I rarely saw other tenants in the halls.  Out of 20 apartments, I only recognized three people.”

As I approached the gate, I did not acknowledge them, but the one on the right, a stalky, five-foot-five-ish Asian, held out a piece of paper with two mug shots on it and said, “Have you seen these men in your building?” The other cop, a six-foot, skinny Caucasian, at least as tall as me, stood idly by, seemingly uninterested.

I briefly studied the sheet in front of me, and said, “No, I haven’t. Sorry.” I reached for my key to unlock the gate.

He must have thought I was blowing him off because  in an air of disbelief, he said, “You mean to tell me that you’ve never seen either of these people?” and stabbed his petite forefinger at the picture on the left side of the page. “He hardly looks like anyone else in the building, so you should’ve seen him.”

As far as I knew, I was the only person of color in my neighborhood who did not live at the housing projects down the street. I didn’t know whether to be insulted by the insinuation that the black guy in the photo didn’t “belong” in our walk-up or not.

I looked down into the cop’s face for the first time. “Seriously, I’ve lived here for nearly five years now, and I barely know what the lady across the hall looks like. So, I wouldn’t know if they’ve been in the building or not.”

It was true. My building was like a ghost town. I rarely saw other tenants in the halls.  Out of 20 apartments, I only recognized three people.

The woman across the hall from me was old. I saw her peek through her cracked door once when I gave her a package that was accidentally delivered to me. As far as I knew, she never left that apartment. The only thing I was sure of was that once in a while someone who I assumed was her son would stop by, and that she didn’t start watching TV until 2 am on weeknights. I would hear the same Chinese soap operas blaring through the insanely thin wall we shared, because she was most likely half deaf and slept through the daylight hours.

The woman farther down the hall would stop by my apartment with her baby on her hip and plead with me in very broken English to call the landlord because she had no heat and her baby was cold. I couldn’t stand the thought of a child suffering like that. Who could? So, I would always say, “I know! I definitely will,” nod profusely, and immediately call 311 and the landlord in rapid succession, even though I had already done so earlier the same day. I had no heat or hot water either, but I chalked it up to the price of cheap rent. I would deduct money from the eleven-hundred-and-change for each day heat was absent, and my landlord never had an issue with this. He was an Italian man in his late 30s who lived in Jersey. Oddly, I had a good relationship with him, but it still took him two years to install a new boiler. The point is, I knew what that lady looked like only because I answered the door for her. She lived on the same floor, but I didn’t even know what her husband looked like. I suspected he was a raging alcoholic and most likely a wife beater from what I could gather from the sounds emanating from their apartment. I was constantly tormented about when to call the police. Their baby cried constantly. They led a miserable life. But, I couldn’t have identified him in a lineup or otherwise. I had never seen his face.

The only other person I could even begin to recognize, was the new girl upstairs. She was the second non-Chinese tenant in that building and had moved in a few months prior. She was a Swedish woman, also in her mid to late twenties, with an out-of-date blond bob identical to that of Chynna Phillips in the 90s. I met her on the stairwell. She was carrying a bag of recycling down to the dumpster when the flimsy plastic ripped. Empty handles of liquor and beer bottles flew in every direction as they hit the stairs and bounced unpredictably like Plinko chips. I helped her to gather them for two flights down, and we introduced ourselves. Her name was Inga. After that, I would occasionally say hi to her on my way in or out of the building.

The cop looked me up and down, and decided to give up the fight, so I unlocked the gate and went up the four flights of stairs to my apartment.

It was an unusually hot summer that year, and Inga had a slew of people coming in and out at all hours nearly every single night of the week. With windows open and the music blasting (a mixture of alternative and classic rock – my kind of music – so I never complained), I could hear them as they came in, as their conversations got progressively louder and stranger in what I believed to be drunken, coked-up rants. I figured that because of the frequency of revolving individuals, someone was most likely dealing out of that apartment. And, because I had served a month on the jury of a murder trial for a drug deal gone wrong the previous year, I always half expected a shootout and a stray bullet to tear through my walls, CSI style. That summer, LCD Soundsystem lyrics looped endlessly in my head: New York, I love you/ But you’re bringing me down. I also half expected that one day the woman down the hall would bring her limp, lifeless baby to me and actually beg me to call the police— Like a death in the hall/ That you hear through your wall— in the back of my mind, both of us were somehow the foregone casualties of wayward urban violence. But, of course, those fears were only minimal and never strong enough to warrant moving out.

In late September, I was awakened by loud pounding on my door. It was daybreak, but my windows were on the backside of the building where the bricks of six adjacent structures smashed together to form a perpetually dark cubby with cement and weeds below. It was still dark. The banging continued though, so I jumped out of bed and went to the door. I looked out of the peephole and saw four men in black vests. They had guns. It’s possible that the logos on their gear read FBI, but that could just be another TV memory now implanted in my brain. I recognized the two furthest as the cops from the stoop incident. I cracked the door with the latch, and chain still attached.

“Who is in there with you?” the knocker said, holding what I assumed was his badge, which also may have read FBI.

“No one. Well, I mean it’s just me and my cat.” I said this more out of confusion and sleepiness than concern for their presence.

“Okay, you won’t find anything in here.”

I opened the door. One agent swooped in and looked around. “Where is he?” another said.

“I bet he’s in the tub. Check the tub,” he said to the one wandering around my 400-square-foot apartment as if a hidden room would somehow magically appear.

In that moment, watching this stranger poke around in the bathtub, under my bed, in the closet, under the kitchen sink— Who could fit in there?— I thought of Inga and the long hot summer. I also thought about how often people miscount the number of flights in pre-war walkups.

“You may actually want to be upstairs,” I whispered to no one in particular as I pointed to the ceiling above me. “I think that’s who you’re looking for.”

The agent at the door looked at me with the tiniest flash of panic, “There’s another floor above this one?”

Then, the thick static of radios: Chrrrchrrr… “I can see him on the floor through the back window. Where are you?” This had to have come from someone stationed on the roof of the building on the opposite side of the courtyard.

Before I could process what was happening, they tore up the stairs, one saying “We’re going in now!” through the radio on his chest. The agent in my apartment ran past me through the door and slammed it so hard on his way out that it hit the latch and swung back open. There was no apology or acknowledgment of me. I stood in my open doorway. My cat must have been hiding, because he didn’t try to make his usual daring escape. All I heard next was the thud of a door, unintelligible yelling and a lot of shuffling of feet. One very audible, “Get up!” and then more shuffling. New York you’re perfect/ Don’t change a thing. I closed the door; my alarm clock went off, and I got ready for work.

When I arrived back home that evening, I went up the extra flight of steps to find that yellow police tape had been strung in a giant X over Inga’s apartment door. It was like that for a couple of weeks until the apartment was released by the authorities, and my landlord decided to “renovate” it by removing the wall that made our tiny units one-bedrooms. He later explained to me that he had replaced the wall with a small glass partition because he thought a studio would appeal more to the influx of hipsters moving into the neighborhood.

A month later, he rented that apartment out for more than three grand, and within a few months later there were several more renovated apartments in our building with English speaking tenants who introduced themselves to me in the halls, which they frequented regularly.

That’s when I moved out.

M. P. Nolan is an English professor and writer of identity-driven poetry, creative non-fiction, mystery, and academic texts. She is the author of Stratification. For more information visit www.mpnolan.com.