As a child growing up in South Africa, my toast was made almost exclusively with whole wheat bread. It was coarse and rustic; better toast than I have tasted anywhere since. I loved butter and fig jam, or butter with Anchovette paste which always tasted better when my mother cut my toast into “fingers.” My other favorites were dark, pungent Marmite and hard yellow cheese covered with a thin film of strawberry jam. On Saturday mornings, my toast was usually made from the leftover light, white, slightly sweet challah bread that graced the Shabbat table the night before, best with butter and honey. 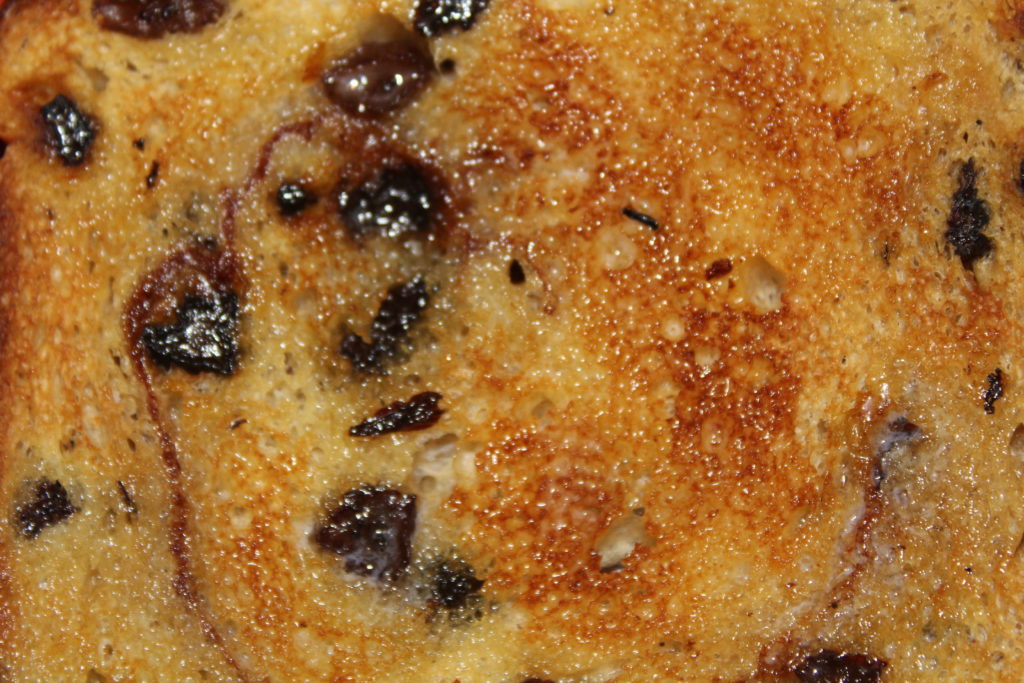 Inhaling deeply, the smell of past-tense toast inexplicably stirred in me a turmoil of all-at-once emotions: a melancholy ache for times and places and people long past; a joyful lurch for my solitude; gratitude for family and the warmth of a kitchen where I can return .”

After college, I spent a year on a kibbutz where we would gather around standard-issue electric heaters repurposed to toast slices of white bread we had ferreted from the communal dining room earlier in the day. We’d burn them to a golden crisp and spread the hot toast with butter and cinnamon sugar or hashachar ha’ole, a sweet chocolate spread.

As a young working woman, I’d swig my coffee and shove toast down my gullet while rushing to catch the bus. Burned, under-done, dry or buttered. No matter. Sometimes it was so gravelly it would scratch just one side of my throat going down, and leave it feeling raw and sore for the rest of the day.

Married with children now, it’s neither the toast nor the toppings that gets me.

It first happened when my kids were young, post-whirlwind, after the morning rush to school. After the pets had been fed, after schedules discussed, forms signed, arguments mediated, lunches packed, milk splashed from bowls of Cheerios, toast toasted and coffee slurped against the backdrop of All Things Considered. On the drive home, my shoulders still up around my earlobes, I’d turn the music from their favorite to mine. I’d let out a long, slow, quivery breath, feeling like I’d already completed a day’s work by the time I step through the back door and into the kitchen, clanking my keys onto the counter.

That’s when it would hit me: the lingering aroma of ghost toast. Inhaling deeply, the smell of past-tense toast inexplicably stirred in me a turmoil of all-at-once emotions: a melancholy ache for times and places and people long past; a joyful lurch for my solitude; gratitude for family and the warmth of a kitchen where I can return.

My children are teenagers now, our breakfast routine though still rushed has mellowed. But when the house is finally quiet, the sun streaming through the window, the dog peacefully basking in its warmth, the cat lazing alongside the dirty breakfast plates and cups poised like a still-life on the counter and all around me is splendid silence, there it is: the after-aroma of toast already toasted, already buttered, eaten and gone.

It’s scent reminds me that moments become months, that life passes by. In the blur of hundreds of hurried mornings, the essence of after-toast captures what is ephemeral.

Nina Kavin grew up in Johannesburg, South Africa and now lives in Evanston, Illinois. This is her first published piece.