We were already set and just waiting for the go. At the top of the 30th Street hill, gravity pulled at us less than we hoped for, calves tensed, driving rubber soles into the pavement, poised to lean forwards.

I threw my body forward with all the push my legs could generate, shoving the seat of the cart just enough to keep it out of the way but not so much that it got gone. I kept the edge of the wood frame just ahead of the one foot whizzing forward to grab pavement and kick off, then the other, then the first, the other, the first, other, first, other-first-other-first-other-first. At the very limit of angle and drive and resistance, at the edge of falling, the go-cart starts to pull away, and with one final lunge I throw my body past the seat, land in it, and grab the steering wheel. 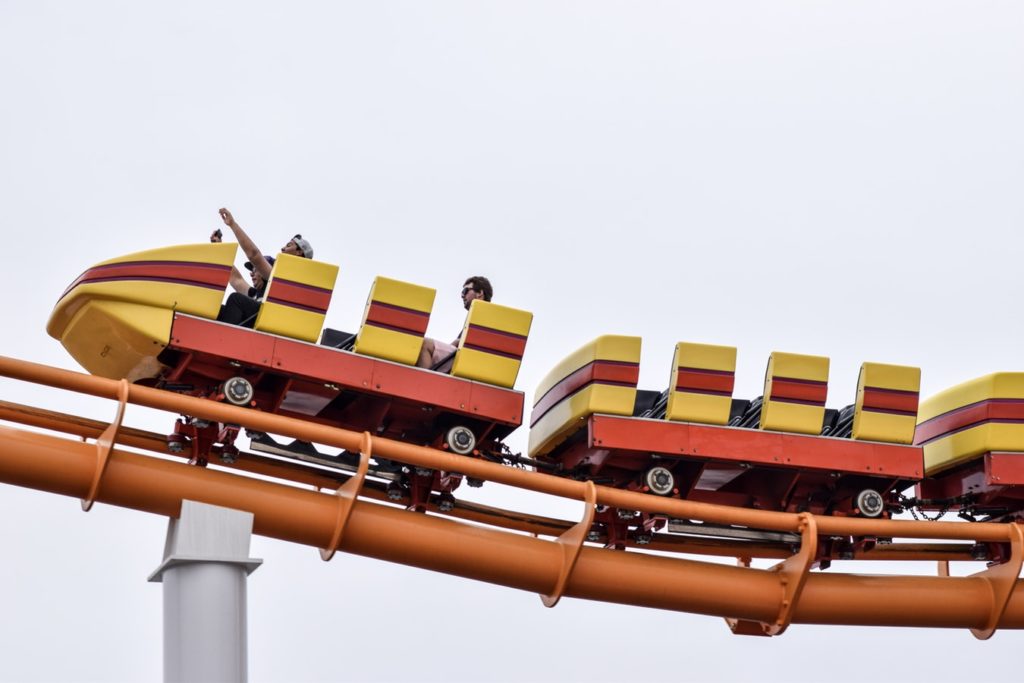 As the truck strains to climb the next hill, I look over at her, and she lifts her eyes and looks back at me. I raise an eyebrow, and one corner of her mouth starts to curl up. At the crest, I kill all the truck lights and turn up the volume. I take the truck out of gear and my feet off the pedals.”

Speed was what I was chasing. Not distance divided by time elapsed, because it hadn’t yet been stuck with a pin and mounted under glass. No, not the idea of speed, the downright gut-tugging rush of it. The wind of it, the strain of it, the slippage, the blur, the risk, the fear. The fun was the loss of control and also, without contradiction, the sense of mastery that came from not wiping out. How sharply could you turn before starting a slide? How far could you ride the slide without rolling? What if a car came around the turn and headed for you? Who could get to the bottom of the hill first? I don’t remember winning or losing, and I’m sure I did both. What I remember is the speed.

At ten or eleven years old, there’s nothing better than spending after-school hours rolling down the hill and trudging back up, pushing or towing the now slow and heavy go-cart back to the starting line. The neighborhood would fill with the growl of hollow plastic wheels on pavement, whoops of excitement or exertion, and the shouted taunts, challenges, dares, and defiant recaps. We all have to be back home before dinner, but that’s forever away and never crosses our minds until we hear the first of our parents calling from down the street.

It’s been decades since I’ve seen a go-cart. Today my wife and I have sold our first home, which sits full of packed cartons and empty furniture and fading memories that need to be out by tomorrow. The next job, that would allow us to afford the next home, vanished this week. Of course the mortgage followed right after it. I pick up the moving truck on my way from work in the afternoon and the sun sets on us pacing, walking into the house empty-handed and out again to the truck with arms full. Each trip we walk into a house that is less of a home, and walk back out a little slower, on legs a little heavier and stiffer. I charge up the truck ramp, trying to let the momentum carry part of the load. On my way back down I slow at the top and descend with knees threatening to buckle with each step. We know where the truck’s going tonight, but what will happen after that is too dark with anxiety to be seen.

The past year has been a financial sliding-tile game where we would try to make all the numbers line up according to the bills that came in. At the end of every month there was always a square left open no matter how clever we were at the game. We’d looked at each other over the checkbook balance and agreed that we were one unexpected failure away from losing it all. That was at least three unexpected failures ago.

The central air quit right at the start of last summer, and we learned how to make the most of the window unit I got for our bedroom and a pedestal fan to blow the cool air through the door into the den. When the car broke down, stranding my wife at the side of the highway, I rode my bike out to get her. We’re resourceful, we’re capable, we know how to work hard and how to hustle to make it work. And we made it work. Then the pregnancy got complicated, and that took us past where we thought our limits were, and we learned how many types of pain the hospital holds, and about costs that go far beyond the financial, but are still accompanied by bills that have surprisingly large numbers in the box titled “Amount Now Due.”

The only good option we had left was to move, downsize, and find a place with more opportunity, but none of that went as planned. At each critical point we extended ourselves to get as close as we could on our end, only to have someone on the other end let us down. Each time it was left to us to quickly improvise a solution. One catch followed close by another, accelerating their pace like tipping dominoes, and we found ourselves working harder and running faster to keep our feet under us, and to keep from being overtaken by the feeling of it all slipping away. Tomorrow there will be calls to make, and faxes of documents to print and sign and scan and send. There will be long minutes of looking at the bank account trying to calculate how long the balance will last without any idea of what the expenses will be. There will be silent pauses between sighs wondering how far we could get just hitting the road with the cash we’d scraped together for the down payment.

When there’s as much in the truck as we can fit, my arms are too tired to roll the rear door down softly and I slam it too loud for 3:30 in the morning. I sit on the tailgate and straighten out my hat and my back as she stands between my knees and lights two cigarettes. We each quit a long time ago, but tonight we just sit and puff without words or guilt. I finish with one last long drag and crush the butt on the bumper, watching the sparks shower down. When we’re done, we each walk up front and struggle to climb into the cab. When I turn the key in the ignition, the engine sputters for a moment before starting up. I stretch my neck and shoulders before putting it in gear and easing on the accelerator. As we turn out of the driveway of the empty house, we hear the sound of shifting and settling in the back. It’s tomorrow already, and the only thing that’s certain is we’ll have to wait and see.

We head out of our neighborhood, spent and sitting quietly as the streetlights peer in, pass by. Tomorrow is too unimaginable for us to even talk about. The sun will be up in a few hours, and I know I’ll sleep in. My entire body is exhausted and there’s nothing to get excited about that might distract it into keeping moving. We roll the windows down to try to let the humidity out of the cab.

We come around the big bend to approach the main road. As we do, the traffic signal turns, indiscriminately following its late night sequence. We stop under it, lit red, with the truck’s left blinker clicking, clicking, clicking. No one crosses our path, but we’re still left waiting. My vision blurs and my mind starts to idle in a tight spin. I blink hard to bring them both back into focus. The light finally returns green and I get the truck moving again.

Second gear, then third, and the air finally feels cool through the open windows, blowing our hair back and drying the sweat on my neck and flapping the creases of my t-shirt. She reaches over to turn on the radio, which the last renter left tuned to a pop country station. As the truck strains to climb the next hill, I look over at her, and she lifts her eyes and looks back at me. I raise an eyebrow, and one corner of her mouth starts to curl up. At the crest, I kill all the truck lights and turn up the volume. I take the truck out of gear and my feet off the pedals. The hill starts to fall away, and gravity grabs hold of the truck. The panels shudder with vibration, the side mirrors whistle, and the hum of the tire treads on the pavement rises in pitch. As we fly through the next intersection we blink at a camera’s flash, while some cowboy sings about his true love.

There’s a picture on the ticket that finally finds us. In it, you can see us with our hands up in the air, laughing.