Think of my story the next time you’re driving on a rural highway in the dark. Watch the taillights ahead of you, the headlights that advance from the opposite direction. Consider their origin, their aim, their destination. Imagine the quiet conversations, the sleeping children, the lost souls turning to God or talk radio.

Remember my tale when you’re visiting CarMax, running your hand across the upholstery. Beware of the Honda Accords. 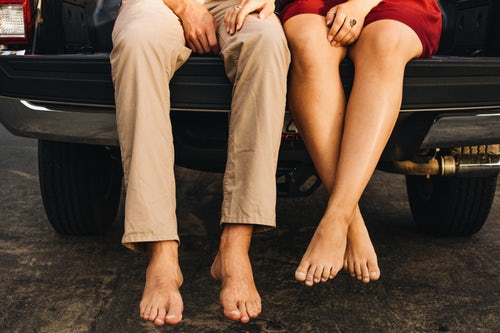 Working slowly, I backed one arm from its sleeve, then the other, and slipped the top over my head. Beams from the passing cars lit my pale chest, but her song didn’t waver as she drove.”

Gretchen and I had been married less than a week — six days, to be exact. After the wedding in Knoxville, we traveled to Charleston to recover from the celebration. That final morning, our spirits refreshed, we left the resort on Kiawah Island and wandered south along the Carolina coast, stopping at Edisto Beach, the town of Beaufort, and The Shrimp Shack. In the early evening, walking barefoot on the sands of Hunting Island State Park, we decided to return to Tennessee.

The drive started well. The climb is gradual on that long ascent from the coastal plain; the interstate rises for miles, crests, and descends. At twilight, the Blue Ridge Mountains were dark against the sunset.

We talked at first, tired but content, recalling our favorite moments from the trip. After a few hours, Gretchen relieved me at the wheel. When our conversation waned, she sang along with Patty Griffin in the dark.

For a while, I was impressed by my wife’s concentration, her immersion in the landscape, the Piedmont that gradually transformed into the foothills of Appalachia. But this talent soon became unsettling, especially in a new bride. Her focus was fixed on the task at hand, rather than the narcissist in her passenger seat. She had already showcased this ability on the beach, engrossed in her paperback novel, ignoring the husband in the Atlantic, the man-child splashing in the waves for her attention.

I devised a test: I would take off my shirt, simply to see if she’d notice.

Working slowly, I backed one arm from its sleeve, then the other, and slipped the top over my head. Beams from the passing cars lit my pale chest, but her song didn’t waver as she drove.

So I doubled the investment. I kicked off my sandals, loosened my belt, and unbuttoned my shorts. Using my legs, I lifted my body slightly — less than an inch, lest the motion distract her — and worked everything onto the floor.

Naked and grinning, I waited for her reaction. And waited.  And waited, my pride fading with every mile. Nothing.

That’s right. I had stripped for my wife, and she failed to notice. What could I do? Hold my ground and wait? Slink back to the land of the clothed, ashamed at my impotent gesture?

Finally, in the silence between tracks, Gretchen looked at my face and smiled. She glanced at my torso, then lower. Her eyes opened wide.

Even so, her response was subdued. The Accord never wavered on its path.

Thus, a contest was spawned that would liven our road trips for years to come. South of Roanoke, on a journey up the Shenandoah Valley, Gretchen returned the favor. On the road to Yellowstone, I tried — and failed — to shock her once again.

Now, over a decade later, the competition has been suspended. The Accord was sold to CarMax, replaced by our minivan and car seats for two young daughters.

But once my children head off to college, the game is back on. It’s so on.

So remember my story in fifteen years, when you’re crossing a Southern state at night. As you watch the headlights emerge from the fog, you might want to avert your eyes. You’re probably the only one with pants.