There is a creek running under the bridge at the end of our street. It owes its existence to runoff from the steep, wooded hills of the Mt. Tamalpais watershed. In the rainy season, it can be a rollicking torrent and in the summer, it’s often completely dry. 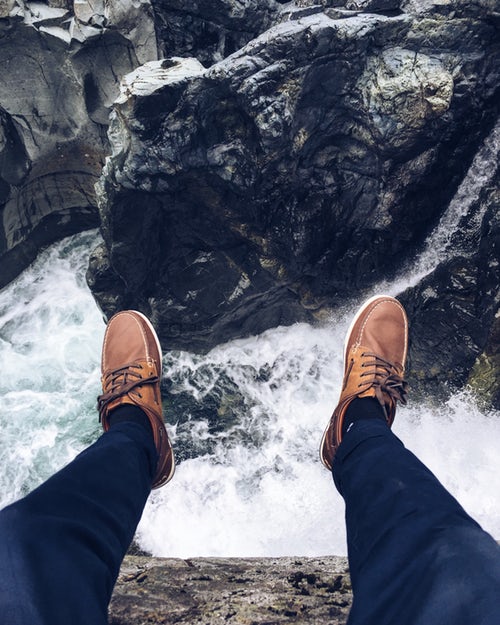 … after my blast of x-rays, I would go to the basket and pick a stone and we’d walk to the bridge, stand there for a moment or two looking down into the glittering but barely moving water, and I’d toss it in.”

Flooding is not unusual in our part of the San Francisco Bay Area, but according to old-timers here, our creek floods farther downstream, never at our end of the street. The banks by the bridge are 15 to 20 feet high and from one side of the bridge to the other, it’s probably about 40 feet. This year there’s no danger of flooding here or downstream. It’s been another winter of little rain, and we are all worried about what that bodes.

In the fall there were cataclysmic fires not far from here, because trees and grasses and wild shrubs were parched to tinder and kindling after a long, hot summer after a winter of record rainfall in these parts.

In February, the creek was very shallow and flowed only lackadaisically amongst the small boulders and over the stones and pebbles that pave the stream bed. Some of those stones were put there by me and members of my family.

Just before I embarked upon the grim slog through radiation treatment for cancer in my neck (after radical neck dissection), my wife and I took a walk into the nearby woods and gathered thirty stones, ordinary rocks with nothing remarkable or particularly beautiful about them, just good, hard-working, proletarian stones. We brought them home and arranged them in a large, flat basket on the dining room table, one for each day of my impending treatment. Then, when the treatments began, we would return home after my blast of x-rays, and I would go to the basket and pick a stone and we’d walk to the bridge, stand there for a moment or two looking down into the glittering but barely moving water, and I’d toss it in.

As I watched the arcing trajectory of each rock, I said a wordless little prayer to nobody in particular. Then we’d walk the couple of minutes back to our house and I’d take a nap while she kept our small boat floating and on course. My sister came to visit for a few days and before she left, I asked her to throw a stone in. Our daughter who lives in Germany came to stay for several weeks, and she threw a stone as well. My wife threw the last one.

The treatment was a terrible grind. Who’d have thought it? A few minutes each day getting zapped. No big deal. It was, however, a very big deal. I lost my sense of taste, my energy, and lots of weight. The beard on one side of my face came out in handfuls, and I got terrible burns on my neck. I was indescribably, unutterably exhausted, weary down through my bones and deep into the ground. And all the while there was a sense of foreboding, of dread, as that most terrifying of words thumped and rattled around in my cabeza – cancer. But our daily trip to the creek always gave me a moment’s peace, when I let my mind inhabit the flying stone and rest in the still waters beneath the bridge.

At the end of my treatments, a PET scan found no evidence of cancer anywhere in my body. I have checkups with oncologists and surgeons every two months and they assure me that I’m doing well. I can taste again, I’ve gained back all the weight I lost (and more) and enough of my beard returned so that I don’t look like a discarded slipper that some dog has lovingly chewed.

Every time we go for our hikes in the watershed, we pass over the bridge and I pause for a moment to look over the railing down into our creek – the one that was there for us during our difficult and painful ordeal, receiving our prayers; the one that has been flowing for, who knows? Thousands of years? The one that droughts caused by climate change could dry up; the one that reminds us of our obligations to the natural world.

Cancer is a villainous egotist; it thinks only of itself, merrily performing its mad, maniacal tarantella of replication without regard for anyone else, unlike our bodily systems that have understood from the beginning the beautiful necessity of cooperation. It is not far-fetched to compare cancer to the carbon-grubbers and their ilk among us whose unhinged replication of profit trumps all other human endeavors. If left untreated, the cancer in our bodies will likely kill us, and so will the cancer that infects our world.

I would like that good creek up the street to be there for another ten thousand years, playing a small but vital role in the earth’s circulatory system, rising and falling with the seasons, and giving rest to the weary.

Buff Whitman-Bradley’s poems have appeared in many print and online journals.  His most recent books are To Get Our Bearings in this Wheeling World, and Cancer Cantata.  He co-produced the award-winning documentary film “Outside In” with his wife and the MIRC film collective and made the film “Por Que Venimos.” His interviews with soldiers refusing to fight in Iraq and Afghanistan were made into the book About Face: Military Resisters Turn Against War. He lives in northern California.

3 thoughts on “The Good Creek”