Because each person brings a gas grill to a marriage, along with at least one table-top Hibachi and an old Weber whose bottom is rusting out beneath a pile of coal going diamond, you drag one grill to the curb and tape to its plastic cover a sign on which you’ve markered, with misplaced irony, “TAKE ME, I’M YOURS” and keep another grill whose ownership everyone pretends but doesn’t at all forget to know. 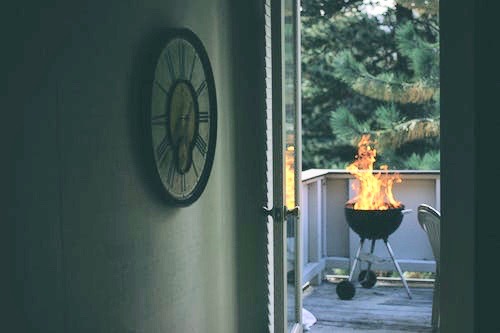 Call it what you will. From gridiron, from wickerwork, from hurdle. From backyard barbecue to interrogation, torture. The metal lattice admitting air to cool an engine.

When my parents divorced, my father got the incontinent Shelty and my mother the Baldwin concert grand, even though my father was the only one left in the family to play the piano and my mother the only one whom the dog would not nip. Everyone knows how parting couples hang onto material goods as a proxy for feelings they don’t know how to express (things: from the old English, referring to the matter under discussion, the content of a council, an assembly, so that divvying up the stuff across the table of the mediator really is to decide to stop talking—or maybe all the things in the ten-page agreement you end up signing mean “I don’t forgive you for saying that to me” and “I never said that to you” and “that’s why you hurt me so?” and “stop interrogating me!” … also “thing” from French chose from Latin cosa meaning “judicial process, lawsuit” which means everything is a landmine of misunderstanding and a contest of wills).

One afternoon, a year into it, married living apart is what they call it now, the provisions of that document-gathering-dust on a desk upstairs largely ignored by both of us, especially where matters of what-belongs-to-whom are concerned, I walk out onto the back deck, carrying my aged, emaciated cat like a baby on my shoulder (because I don’t have a baby, we never had kids, I was quickly too old, never wanted them, we married late, regret meaning long after the fact to weep and moan), regard the greenery of the yard, made lush by rain, grape vines and raspberry branches winding and stretching across fences, things he planted, the only things that really take hold in the sandy, acidic soil of a neighborhood full of pines — turn around to the empty corner where the grill used to be.

You done me wrong, baby.

I remember the excitement of rearranging the furniture in my bedroom when I was young, how magisterial it felt, the potency of change held in my own little hands—pull the desk under the window, shove the bed against that wall, roads open for the taking. Why, all grown up, do we imagine that moving the couch could make any manner of difference to suffering? On the other hand, why must we clamor and seize? It’s not like I needed it, don’t eat meat, does anyone living alone use a grill? I once called the fire department to ascertain the explosion risk of propane.

And isn’t it odd that going off on a tangent really means to strike, gently, and to partake in; which means that when he swerved, when he followed that unwinding ball of yarn out of a labyrinth of his own devising (clue = clew = Theseus’s thread), which was his sense of a marriage, sense of non-ending, he was still touching me, abutment, he never fully let go. Means taking is not the same as never talking. Means possession is old French happiness, never say never, chancy used to mean luck.

Gone away for good.

Susannah B. Mintz is a professor of English at Skidmore College. She has published extensively as a writer of creative nonfiction, with essays in American Literary Review, The Writer’s Chronicle, Epiphany, Ninth Letter, Michigan Quarterly Review, and elsewhere. She was the winner of the 2014 South Loop National Essay Prize and a finalist for the 2010 William Allen nonfiction prize, the Epiphany chapbook contest in 2015, and the 2019 Cagibi essay prize. Her work has received special mention from Best American Essays 2010 and the Pushcart Prize Anthology 2018. A short memoir titled “Match Dot Comedy” appeared as a Kindle Single in 2013. Current projects include an edited collection called Unplotted Stories and a collection of personal essays called Love Affair in the Garden of Milton.