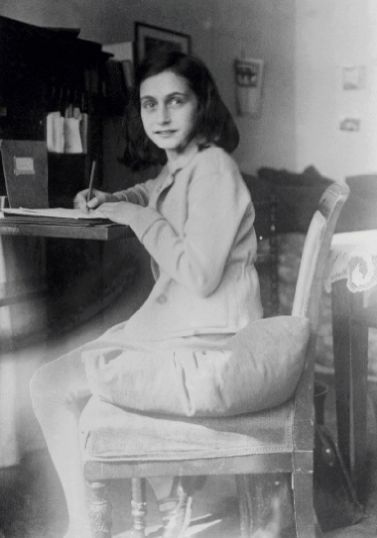 Seventy-five years ago, Anne Frank was pulled from her hiding place behind the wall of her father’s business offices in Amsterdam, put on a train and sent off to a concentration camp for what would be her final months on earth.

Her final months in human form, that is.

Thanks to the quick thinking of her father’s devoted Dutch employee, Miep Gies, who stashed Anne’s diary away in a drawer until the war’s end, Anne and her story are very much alive.

Anne’s words are what brings throngs of people to the Anne Frank Haus at Prinsengracht 263-267 in Amsterdam every day. Lines so long that even with reserved tickets on my recent trip, it took many hours to move through the small, cramped rooms where she and her family hid for two years between 1942-1944. Her diary entries highlight Holocaust history in a way that make people feel it.

The time I spent there with my husband and two friends earlier this month ripped me open, flooding me with memories from how I felt when I first read of The Diary of Anne Frank at 12 or 13. All the way through, this line from Psalms kept repeating in my head: “…out of the mouths of babes … comes strength.”

I’m not sure if the book was a school assignment or a gift from my German Jewish grandfather who emigrated to the States just before the war. I like to think he gave it to me as he was always lost in a book, reveling in words.

As I read, I distinctly remember feeling that Anne could have been a cousin. We were both cheerful and chatty German Jewish girls with dark brown hair and oval faces. And she not only wanted to be a writer, like me, her birthday was the day before mine in June! Among the few items she thought to grab with less than a day’s notice before going into hiding was the diary she had been given as a birthday gift. 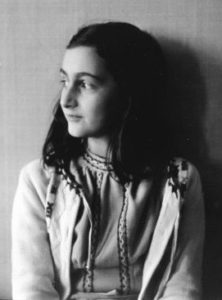 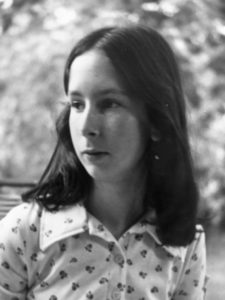 From the very first page, I loved her.

She was passionate about the writing process. “I can say what I mean much better on paper.”

Boldly honest: “Parents can only give good advice or put them on the right paths, but the final forming of a person’s character lies in their own hands.”

A deep thinker: “Look at how a single candle can both defy and define the darkness.”

And incredibly hopeful: “In spite of everything, I still believe that people are really good at heart.”

Her words prompted me to walk to my local drugstore to buy a diary with my allowance money and start a writing practice of my own.

I was not only moved by how candid, thoughtful and positive she was, I also resonated with her refusal to be silent. During the day she and her cohorts had to remain utterly quiet  – a simple sneeze, cough, or toilet flush could upend their safety – and yet this didn’t stop her from finding a way to use her voice on the page.

Like Anne, I scribbled like it was an emergency, searching for truths that I didn’t show to the world. “I want to write, but more than that, I want to bring out all kinds of things that lie buried deep in my heart.” Both of us connected with different parts of ourselves on the page in a way that we didn’t in our daily life.

I, too, had something buried deep in my heart that wanted to come out, a deep and silent pain that would take decades  – and thousands of words  – before I could fully understand it.  It now lives as my memoir, still in progress. There’s no doubt that the words are what helped me heal.

Because, as Anne noted, “Paper is more patient than people.”

After a bite to eat at the museum, my body and soul were still vibrating so I headed back to our Airbnb to rest. As I drifted off, I began to connect more dots.  All of those decades writing in a diary may be why I’m so drawn to the short-form, personal narrative – essays and flash nonfiction and short memoir. They are concise and distilled. They mirror how insight comes.  And how we remember.

When I was a young girl, Anne gave me a huge gift: my first writing prompt. Her words stirred me to go to the page and find words of my own.

She’s seventy-five years gone. And yet her words are still with us. Still inspiring me.

These, in particular, stood out:

That writing is not only something that can distract you from the horrors of the world, but it might conjure up something inside of you that you didn’t know was there:

“I can shake off everything as I write; my sorrows disappear, my courage is reborn/spirits are revived.”

“I want to go on living even after my death! And therefore I am grateful to God for this gift, this possibility of developing myself and of writing, of expressing all that is in me.” 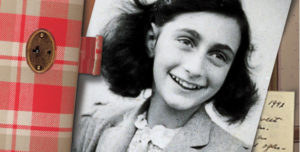