It must have been late 1974 or early 1975.  Luz was a senior, a year ahead of me. She had her own car, a little blue MG. I liked the car and thought she was hot. In those days, just about every girl was hot to me. 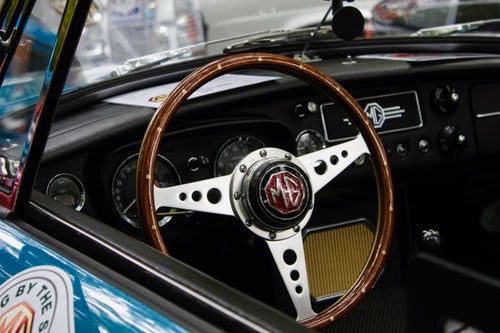 All along the trench, which was about four-foot wide and seven or eight feet deep, people were huddled in small groups.”

We were both on the yearbook staff and were sent out to sell ads. We headed up US 101 and were working the frontage roads where a bunch of businesses in an industrial area were situated. We tried the Frito Lay plant, some plastics company – one making Halloween masks, and finally the 7Up distributor. There we struck gold and sold a one-eighth page ad for $25 dollars.  We’d go back heroes! Back in the MG, Luz asked if I was in a hurry to get back.

She then proceeded to drive me out to the very southern tip of San Francisco Bay, to the salt flats – a tidewater and wasteland area known as Alviso. We drove between endless rows of massive wooden trays spread out over hundreds of acres with fruit spread out to dry in the late spring heat. I wasn’t sure where she was taking me and the mystery only kicked up my excitement several notches.

Luz parked near a massive water pipe jutting out of the ground at a forty-five-degree angle. Getting out of the car, Luz said she wanted to show me something special. That got my attention.

I wondered where but didn’t ask. Instead, I almost jumped out of the car and followed her. After all, Luz was a year ahead of me and seemed like she knew what she was doing.

I followed her like an eager puppy. She had a large brown bag with her which I was sure concealed some important ingredient to this mystery. As she led between the long wooden trays of drying fruit I noticed a young boy sitting on a block of cement playing with a stick. When he saw her approach, he disappeared. I mean, he just vanished.

In the wavering shimmer of afternoon heat I strained to see where he’d gotten to. Then a larger figure appeared from a gap between the trays. A man mysteriously grew, and came into view calling out to Luz in Spanish. I stopped, not knowing what to make of this latest development. After a moment Luz waved me over and introduced me to her ‘primo,’ Luis. Then she gestured to a hole leading underneath one of the trays. Too confused to protest, I followed her.

Unlike the heated fields of fruit above it was cool and almost damp in the trench I found myself below the many trays.  It was dug deep enough for a tall man to stand and there were a few dim light bulbs strung as far as I could see. All along the trench, which was about four-foot wide and seven or eight feet deep, people were huddled in small groups. The men sat together, smoking and talking in low tones. Beyond them, along one side, was a makeshift kitchen built with two-by-fours and plywood. There was even a rusty sink and a couple of propane gas cylinders for the stove. A clutch of women and small children worked over some large pots and pans. I had absolutely no idea what I was looking at or where I was.

Luz introduced me and each man stood and offered his hand with a greeting accompanied by a smile and a nod. All wore work clothes and heavy boots, one or two wore heavy coats on despite the outside heat. They were polite and friendly but spoke only Spanish. The men offered me a stool, which I took, and a cigarette which I declined. They talked in low friendly voices, and even cracked a couple of jokes amongst one another, treating me as if I were one of their group. Luz left me there and made her way further back towards some excited chatter and a bit of laughing. After a while she returned, we said our goodbyes and left.

Back in the car Luz seemed uplifted and even bubbly. She explained that several of her relatives had just arrived and it was good to see that they were doing well. On the drive home she talked about how good it was to see Luis and her other cousins, and how it was good that they had found work. I did a lot of nodding and tried to share her excitement.

But I hadn’t yet processed what I had experienced. My father was a Naval aviator and flew submarine patrol aircraft from nearby Moffett Field Naval Air Station. I had driven past those Alviso flats many times with my folks on our way out to the base. But never had it even remotely occurred to me that out there underneath those fruit drying trays were people living.

That night I found sleep fleeting as I pondered what I was privileged to have experienced, deeply impressed at how welcome these simple peasant farmers – campesiños  – made me feel.

They were men, conversing, smoking and relaxing after a day of hard work; women preparing meals with mischievous playful children underfoot – all literally underground.

I kept this experience to myself for a long time. Not because I thought there was something wrong with what I had seen, but because I felt privileged with my new knowledge, and that my friend Luz trusted me enough to take me with her to see her newly arrived extended family members. I felt like some precious secret had been entrusted with me. After that, every time my folks would up US Highway 101 out to the base I’d look to fields of drying fruit and relish what Luz had shared with me that day.

Looking back, I really did get lucky that warm afternoon. She had opened my eyes to an underground community that I previously had no idea existed. And I’ve never looked at a farm, factory or field the same way again.

Scott Hubbartt is a writer and 28-year combat veteran who lives in South Central Texas.