The worst part was coming home at night and shutting the door behind me. That’s when widowhood hit me the hardest. Two visits to the hospice bereavement group had done nothing for me. Those people, some of them years into grief, couldn’t seem to think beyond breakfast. My life, at least, had structure; grandchildren nearby, a monthly book group, a weekly dance community. I sang. I played the recorder with friends. I had a house to care for. But as I walked out of that second meeting, I realized structure would only take me so far. It would get me through the week, but no amount of structure would address the silence in every room. 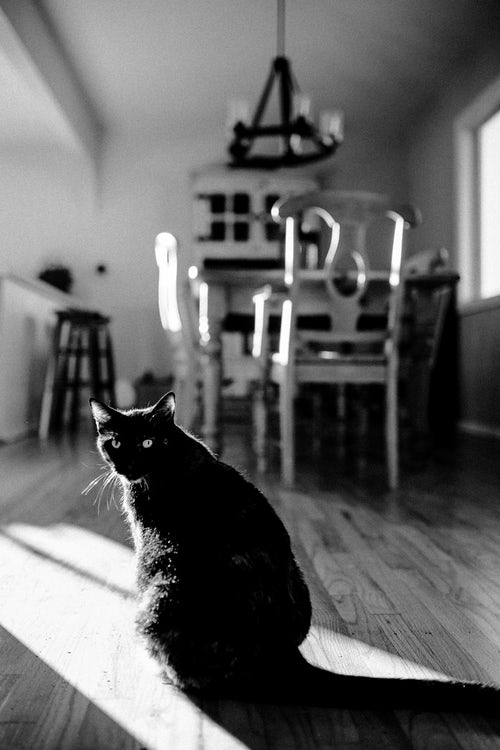 He waits on the top stair, and when I’m ready, we look at each other. I’ll say, “Shall we go downstairs, Mr. President?”

What about my daughter’s crazy proposal? Should I reconsider?

It had been thirty years since the last cat. Back when my children were small, we’d had all kinds, all colors. But though they’d lolled in every corner of the house, they mostly served as portable fur foot warmers. I didn’t spend time thinking about them. I couldn’t have cared less what they might be thinking, or if they even thought.

Years later, when I married again, my new husband and I never replaced our past cats, conceding only that when old age allowed us nothing but life in rocking chairs, maybe then we’d see about a cat. We were already old. Twenty-eight years went by. We got older still. At 89, my husband died.

Eight months after Chuck’s death, my oldest daughter, her husband, and their two boys acquired a cat, a three-year-old portly black male whom the youngest boy immediately named Mr. President. But it was me they had in mind when too many of their friends couldn’t stop sneezing in their house.

“Mom, you need a cat,” my daughter urged.

“We want to keep him in the family,” the boys pleaded, bracing their appeal with promises to help clip his claws and feed him whenever I was away.

“Nothing doing,” I insisted. I was done with litter boxes, hairballs, scratched furniture. I protested until a week after that last visit to the bereavement group, and even then I agreed only to a three-week trial. Secretly I had adored Mr. President the instant I’d first picked him up, but was I ready to take on another male, one who couldn’t even fix a leaky faucet?

For eight months, I had focused on surviving. Tears that wouldn’t quit. Rage. Demands for my husband’s return, before the stroke. A twist in the gut every time I looked at his picture. A large glass of red wine paired with Camembert, crackers, and Bach before dinner did little to mitigate the emptiness of my house without the man who had filled it with his company, his love, his irritating quirks.

A moving bundle of fur is no substitute for a dearly loved man. I knew that. But now that Mr. President was in the house, if only temporarily, the damn cat needed looking after. Within days I was replacing the same front-door greeting I still used, “Hi Sweetheart, I’m home,” with “What’s up Mr. President?” and Mr. President would come running.

I lay down my grief and loss books and began to ask Google cat behavior questions. I grilled cat-owning colleagues in my choral group. Indoors or out? If outdoor, which were the best flea meds? What kind of toys did cats like? What about those hair balls? Cat carriers? Vets?

Twelve days later I knew I wasn’t going to let him go. Mr. President had become my grief therapy, and I was enjoying him.

Relating to a cat after your husband has died is, occasionally, like sensing a tiny shadow of something that once was. Just as I get no answering words when I talk to Chuck’s spirit, I get none when I address my cat. But when I say to Mr. President, around 11 at night, “Well, Mr. President, I’m going upstairs to bed,” I hear myself saying to someone who had only two legs, “Hey, Chuck, I’m going upstairs now.”

Back then, those words would be answered by “Just closing down the computer. Be up soon.” Mr. President doesn’t have to close down the computer, so he usually does come up soon, bell jingling, black tail flapping, and settles on what was once my side of the bed.

Don’t tell me cats are mere opportunists. This cat wants to sleep curled around my head. When it’s hot, he settles for a chair, after leaping up to my pillow for a good-night head bump.

For reasons known only to him, Mr. President occasionally bites my hand or ankle. For this he gets “Bad Cat” yelled at him. He runs, knowing well he’d best disappear. Two hours later he ambles back. So Chuck was when I got angry at him. He would remove himself from my presence, busy himself, and sometime later, judging my wrath had subsided, saunter back in as if nothing had happened. “How about a little glass of wine?” he might suggest with a grin. From Mr. President, I get a cheerful “Okay?” meow.

I notice things about this cat. He’s gentle and sociable, as was Chuck. Although he wakes me up far too early, he does it with humor and affection. He butts my head, sniffs my nose, nuzzles my ears (Chuck used to do this), purrs. He doesn’t push. He’ll give me half an hour before insistence replaces suggestion. He watches me as I put on my slippers. He looks inside the closet as I reach for my bathrobe. He waits on the top stair, and when I’m ready, we look at each other. I’ll say, “Shall we go downstairs, Mr. President?”

Some kind of communication is going on. He could, after all, race down to be let out, but he doesn’t.

But now that I have no one competing for my attention, I’ve learned “meow” can mean more. Here’s one meow it took me a while to figure out: “Pick me up and take me for a walk around the house so I can see things up high.”

I know this because after checking for other factors — not hungry, doesn’t want to go out, enough with the cuddles — I’ll lift him up and this time he climbs to my shoulder and lifts his head to sniff at pictures on the walls, hanging pots, books on top shelves as we perambulate the downstairs rooms.

There’s also a special-purpose meow, almost a mutter, often in early afternoon, for “I’m not admitting this, but I need a nap.” Plop him on his favorite soft chair near the bedroom window and he’s asleep in five seconds.

Nine p.m.-ish, a quiet meow emerges, accompanied by a slow walk to the living room, and a backward look every two steps. This means, “Follow me to the couch and let’s sit down.”

Immediately, my lap becomes Mr. President’s oval office. If I bring my laptop in, his head goes onto the warm keys.

My husband would have loved this cat. Except that if Chuck were still alive, we wouldn’t have a cat. There’d be no need and every reason not to have one. Now he’s gone and Mr. President has become my roommate. It’s no fair trade at all, but what I can tell you is that a live cat, an interesting, querulous, affectionate live cat, beats walking into an empty house.

Lee Haas Norris has published nonfiction in Passager, The Gettysburg Review, Persimmon Tree, The Literary Bohemian, The Boston Globe, Cargo Literary, and other publications.  A graduate of Barnard College, she served in the United States Peace Corps in Moldova in her sixties and later earned an M.A. in English from the University of Maine.