Yeah, he threw a lamp across the room, but I was outside on the balcony so all I knew of the incident was the sound of a huge thunk. I heard the huge lamp thunk — not crash nor shatter, mind you, because the lamp was big and heavy. It had girth. Neither my husband nor I liked the lamp — its mammoth orb of a putty-colored body with a shade that defined fugly better than Merriam-Webster could ever attempt to do — but we got it for free from the Indian family whose house we went to after we moved to pick up their old mattress and box spring. $50. Go Craigslist. The lamp was an extra bonus even though it felt more like a burden than a gift. 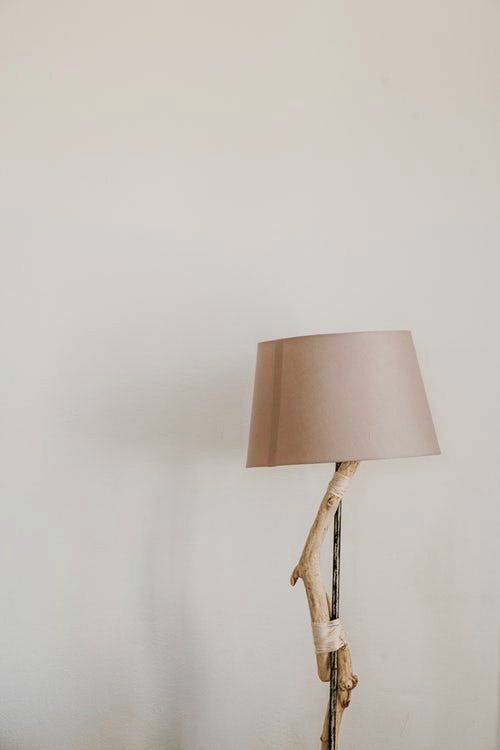 But whatever. It was just a lamp. A free one, at that.”

That big fugly lamp was what my husband chucked across the room that morning, although I didn’t actually witness the altercation so for all I know he drop-kicked it, the image of which is actually kind of amusing. Either way, I’m sure he had his reasons for the lamp-chucking. I suspect it had something to do with his untreated mental illness and semi-psychotic state of late.

But whatever. It was just a lamp. A free one, at that.

I, too, have some anger issues. I’ve been known to chuck a pen or two across the room when my writing just wasn’t behaving. Though there was that one time when I threw the flat screen monitor to the floor because I was in a more-than-semi-psychotic state. Surprisingly, it didn’t break. Though neither did my psychotic state. So off to the psych ward I went. Three days and one new prescribed medication later, everything went back to being okay-ish except for the marriage.

Neither my husband nor I have dental insurance because who has ever heard of being able to take care of your body in this society without going into a suicide-inspiring debt? Ergo, ER. There, I got me some supersized ibuprofen that worked about as effectively as stopping a hurricane with a ceiling fan. Also at the ER, I was told to go see a dentist about the situation going on in the mouth. No shit. They gave me information about the free clinic in town. I would eventually find out that the free dental clinic really isn’t free and that no one there seemed to know how to practice the art of dentistry.

The “dentist” at the “free” clinic “pulled” my tooth. Sort of. I would find shards sprouting up from its ground zero twice within the next year. Two days after the kinda-sorta-but-not-quite “extraction,” I went back to the clinic because I got me a nifty dry socket. Plus, the infection was worse than when I initially went in just a few days prior. Oh, right. Antibiotics. They forgot to give those to me. Whoopsies. The medicinal patch they put over the festering desiccated hole in my jaw fell out within an hour. I went back a third time in three days because I was dying of pain but the dentist told me she didn’t want to do anything else for it because sometimes it’s better not to fuck with a hot mess. More or less.

Which, at times, also feels true for my marriage.

Aside from the horrible pain and hideous stench, another side effect of a dry socket is insomnia.

A side effect of insomnia is an annoyed husband.

Getting up every thirty minutes to ice and pace wasn’t the most restful of actions, so in all of my not-wanting-to-piss-off-my-husband wisdom, I decided to try and sleep on the loveseat in the living room because I like to think of myself as a kind and considerate human being, regardless of my destructive tendencies to throw writing utensils and electronics when I’m feeling super-duper-psychotic, and even when I want to rip off my own head off because of the pain, I feel like I’m still an attentive human being to other people’s needs—though apparently not always. Take that night, for instance.

But first, holy hell, I actually fell asleep! The only way I knew that I fell asleep was because I woke up. I woke up to the sound of my husband eating kettle chips. They were crunchy and loud and at 4 am they woke me up because the kitchen was just a few feet away from the loveseat on which my dry-socketed throbbing head not-rested.

Yeah, I was pissed that he woke me up, but I was even more irked by the riotous sound of his teeth hard at work. Crunch crunch. It amplified the throb throb in my jaw. Oh. Hell. No.

And yes, I then started screaming at my husband and no one likes to be screamed at when it’s 4 am, but also no one with a hellacious dry socket likes being inadvertently chomp-chomped awake at when it’s 4 am. Thus, screaming.

My husband screamed back at me.

This had been our mode of communication lately.

And then the screaming colloquy took quite the turn, one that is as sharp as that street in my town that’s called Dead Man’s Curve for a reason, because the topic of the 4 am showdown somehow whiplashed from late-night snacking to all of the money my family had and he wanted. It had something to do with dental care. His teeth were decaying, too.

After a good number of rounds of not-so-good verbal treatment, my husband stormed off to the bedroom, mid-excellent point I was making from the loveseat. The amount of which this exit strategy pissed me off was equal to the amount of pissed off I was when the kettle chip crunching thing happened a few thrown obscenities ago. I got up from the loveseat because, why not? I was awake. Might as well deal with this B.S., and so I stomped my sleep-deprived body and throbbing jaw into the bedroom and I sat at the edge of the bed, right at the feet of my husband who was just trying to get to sleep. I refused to move because I was in pain, though really it was because I can just be a stubborn bitch like that sometimes, my considerate human being qualities completely vacating me, giving room for grudges to gurgle up and join forces with my relentless shrieking.

It was a fairly quick interaction.

Husband: Go away! I want to sleep!

Me: You woke me up and then started yelling at me so why can’t I disrupt your sleep to yell at you?

Husband: Leave me the fuck alone!

Me: No. You started this conversation, let’s finish it. What in the fuck problem do you have with my family?

My husband kicked me, which made me wobble on the edge of the bed a bit and when I regained my balance I considered lunging at him, but before I could, he decided to make sure his point was clear because he’s always been a very thorough dude when it comes to be being an asshat — just like me and my bitch thing (we all have our signature traits) — he again thrusted his foot into my stomach. I fully fell back, my lunging plan foiled, and then I cried because I was about to throw up and all I could think about was how much that would fuckinghurt what with the dry socket and whatnot.

I then felt kin to Lamp Fugly.

Which is when that metaphorical light flipped on inside me.

Crawling on hands and knees into the living room, I spilled myself into a huge deluge of sobs, though this specific weeping wasn’t sprouting up from the physical pain — rather the emotional one  — as I realized that now there would have to be exhausting relationship-talking and space-giving and using your I-statements-ing and trust-building and boundary-setting and other people’s opinionating and safety-defining and deciding what’s worth it and what’s not worth it and my god how many couple’s counseling sessions are we going to have to have because, yes, now we have to fuck with this hot mess.

Chelsey Clammer is the author of the award-winning essay collection, Circadian (Red Hen Press, 2017) and BodyHome (Hopewell Publications, 2015). Her work has appeared in Salon, The Rumpus, Hobart, Brevity, McSweeney’s Internet Tendency, The Normal School and Black Warrior Review. She teaches online writing classes with WOW! Women On Writing and is a freelance editor. Her next collection of essays, Human Heartbeat Detected is forthcoming from Red Hen Press.