After five miscarriages, I stayed pregnant with my first daughter. Driving from New York City to my mother’s summer house in Northeastern Pennsylvania, I noticed a spotted fawn crossing the road in front of me.

“Stay with me,” I exhorted this baby; the fawn a symbol of all I hoped. 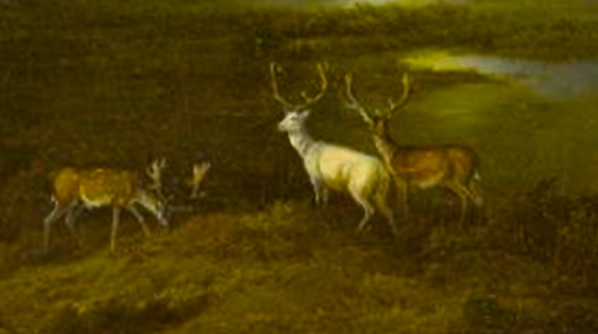 To see a white deer is to be startled, overcome that such creatures exist in our world, like the door in the back of the wardrobe that delivers the Pevensie children to Narnia. The rare sight compels silence and surrender. These creatures seem one step removed from unicorns, but real.”

I have always been slightly deer-obsessed.  I love spotting deer from the passenger seat, particularly as light leaches from the sky and the deer come out from wherever they’ve gone all day, munching apples, bending their necks, grazing calmly in fields, leaping across our neighbor’s hedge, white tails lifted. I never tire of them and I routinely avert my eyes when I see one, limbs splayed awkwardly, lying dead on the side of the highway. It seems wrong that creatures of such grace can be struck down.

When I was in fourth grade, I had to leave the science movie about a starving deer herd. As I sobbed in the company of the school secretary, she comforted me, murmuring that I was sensitive. Years later, I listened to a student explain that one deer fed his whole family for the weekend.  I relented slightly in the face of practicality and poverty, but I remain sensitive and deer-crazed.  Fawns represent hope. And white deer, my favorite, represent wonder.

In Native American culture, all-white animals of any species are considered sacred. For me, white deer feel inexplicable, exquisite. DNA or genetic mutations seem too rational an explanation for their beauty.  In the times I have been fortunate to see them, I’ve felt transformed, too, as if I have born witness to something rare, the way I felt when I held one of my babies in my arms for the very first time.  Awe and wonder.

That summer of the starving deer herd movie, my mom and I pulled off the road, crossed to a guardrail and saw one. Elegant and unperturbed, she stood, glowing, in the middle of a herd of at least fifteen other red deer. To my Shakespeare-besotted fourth grade self, she was Titania, Queen of the Fairies, waiting for her Oberon. I pretended we were looking down at her court, she, the obvious Queen.  Calmly, she moved her head to follow the antics of one silver fawn and one red fawn gamboling around her — clearly her own twins. Dusk deepened, hills forming a natural theatre around this clearing full of Queen Anne’s lace and clover.  Cue the fireflies. Then, the stars. It was spectacular. Mom and I stood, silent, awe-struck as the evening cooled. We breathed in the magic quietly, together.

Later, I saw a huge white, red-eyed buck prancing unsteadily in a neighbor’s yard. He unsettled me; albino deer are not always healthy. The white deer I seek are all-white deer with white tails and dark eyes, not red-eyed albinos. They appear from time to time in the piece of Pennsylvania where we spend our summers. We go looking, following a whisper that one has recently been sighted, each expedition laden with hope, an inhale of possibility. Sometimes the best moments come during the quest, in the thrill of expectation.  Some summers pass without any white deer, though I am always on the lookout.

To see a white deer is to be startled, overcome that such creatures exist in our world, like the door in the back of the wardrobe that delivers the Pevensie children to Narnia. The rare sight compels silence and surrender. These creatures seem one step removed from unicorns, but real.

When my daughters were small, maybe three and five, I heard a white fawn had been spotted way down Allegheny Avenue in our summer community. It was August, late for a fawn, but unable to resist the possibility of seeing the baby, I zipped them into their footie pajamas and set out to look for the fawn at dusk. Like so many moments of parenting, white deer sightings cannot be planned; there’s an element of luck, of being in the right place in the right time. And that Sunday night, we were.

Curled in nest of grass, quite near the road, the late-drop white fawn was utterly unaware that she was visible, a bright beacon.  Her mother was nowhere near. We gasped when we finally discerned the red twin, curled in a nest with its white sibling, so carefully camouflaged in the grasses. How we could have missed it? We marveled that we’d spotted it at all, imagining all the other fawns hidden in plain view we may have passed. For a long time we gazed until my daughters worried that our presence might be keeping the mama deer away.

The girls fell asleep in the car on the way back to the city. I’ve kept the image of those deer twins in my head all these years, braided with memories of our two daughters, who are close in age and miraculous. I imagine the deer mother tucking her babies in together, instructing them to stay put, to stay safe in deer-mother-speak. All mothers mutter those mantras.

My son was born when I was forty-three, his sisters nine and eleven years older. A decade after we’d discovered the bright white twin and its red sibling, I learned about a white deer sighted in a nearby cornfield. My own late life bonus baby was now ten, and went looking, but the deer was a no show. A few days later, I ask the farm stand man who sells fresh picked corn if the white deer was still around.

“Nine.” he said. “Every night. Regular as a train. Right over there,” he gestures across to the corn field. “A whole line of cars pulled over to watch his rack of antlers.”

The idea of the other cars saddens me. In my mind’s eye, seeing a white deer is a private viewing, less premeditated than being part of a crowd. So much for spontaneity. But, if this deer has chosen a field off Route 42 to graze in, who am I to criticize?  I think we’ll go. I have my memories of the deer queen, of the hidden fawn and her glowing twin in the dusk. I want to give my son a memory, too.

It’s hard to know whether my son will be as besotted as I once was by his first white deer, gripped by her magic and majesty, or unaffected by her charms, having seen seven impossible things before breakfast on his iPad. There’s no telling. Still, we’ll go. There’s always the possibility that a white deer’s daily routine could weave itself into my son’s imagination as its antecedents wove themselves into mine long ago.

Ann V. Klotz is a writer and headmistress in Shaker Heights, Ohio. Her work has appeared in Literary Mama, Mutha, the Brevity Bog, Mothers Always Write, the Feminine Collective and in the anthology What I Didn’t Know published by Creative Nonfiction.

2 thoughts on “Looking for White Deer”