My 89-year-old mother’s whole world has been reduced to a single flavor: vanilla. 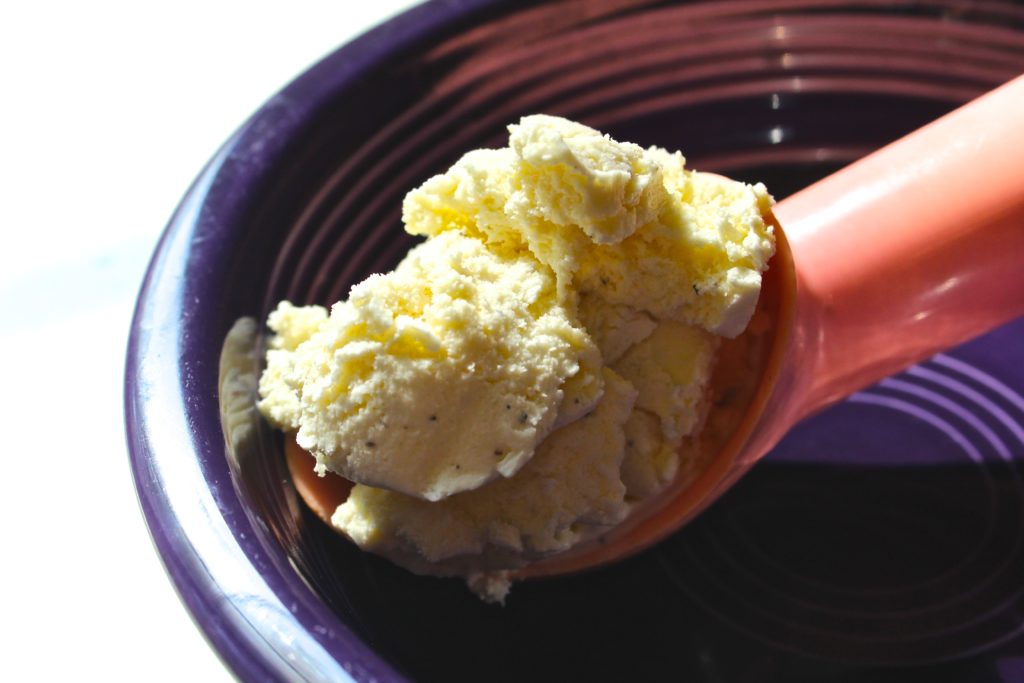 But my mother, who once craved al dente cappellini marinara, lobster tail drenched in melted butter, and the seasonal indulgence of my fresh strawberry shortcake, has lost her sense of taste. “It tastes like nothing,” she says, of most everything.”

This once beautiful and statuesque woman is now drawn, gaunt. As she naps, fitfully, her frail hands reach out and grab for something only she can see; she mouths words I cannot hear to someone I do not know. When I wake her, she is disappointed.

Once, while on her honeymoon, she flirted with Jake La Motta and charmed him, like she did all men. But her looks were deceptive; she had great business acumen. Though she possessed the body of a World War II pin-up model, she became the first female heating contractor in Michigan. Later, she opened a popular clothing boutique in the Detroit suburbs. She could figure sales tax in her head and multi-task like no one else.

She was devoted to my father, and nursed him at home for many years when he fell ill, long past when many might have abdicated that responsibility. But she loved him fiercely, as she did her children, grandchildren and great-grandchildren.

Like many women of a certain age, she wouldn’t be caught dead leaving the house without full makeup, dressed meticulously and coiffed just so, with standing manicure and hair appointments each week. How distraught she would be to know that her pillow has permanently flattened the back of her lovely white crown of hair. That her blush, applied lovingly by her well-meaning caretaker, looks clownish on her papery skin.

She worried about weight most of her life. In a reversal of fortunes, it is now her children who struggle with her weight, trying desperately to get her to eat. But my mother, who once craved al dente cappellini marinara, lobster tail drenched in melted butter, and the seasonal indulgence of my fresh strawberry shortcake, has lost her sense of taste. “It tastes like nothing,” she says, of most everything.

The change was gradual. At first, she couldn’t remember what she liked, but if put it in front of her, she would eat it. If left to her own devices, she would forget to eat. Food purchased for her at the grocery store would languish in her cupboard and molder in the fridge well past the sell-by date. Her now-full-time caregiver would coax her into eating while watching “The Today Show” and reruns of “The Price is Right.”

Then came the push back. Food she had dutifully consumed the week before was now unacceptable. Meals at her favorite deli were sent back repeatedly; they just weren’t right. Most foods elicited a grimace, a disgusted smack of the lips, and a pronouncement of “too sweet!” although she would still reliably eat seven-layer cake and challah smothered with jam.

The current phase, after the fall that broke her hip and necessitated a weeklong hospital stay followed by a lengthy stint in a rehab facility, is far more concerning. I drive in from Chicago to visit; my sister gives me a list of food to pick up. Hope-filled, I bring a bag filled with tasty tidbits to her house. I unload the container of tuna fish salad, a chocolate chip scone, a vanilla milkshake. I arrange it on the tray table and try to work my magic, feeding her choice morsels.

“I don’t eat that!” she cries. “You’re trying to poison me!” A proffered bite of tuna is spit into my hand; she closes her mouth to the chocolate chip scone. “If it’s so good, you eat it,” she says, with venom. I know it’s the dementia talking, but I still fight back tears. I struggle to find my mom, the one I knew. She’s in there, somewhere, but it’s a deep dive.

The only thing she accepts is the vanilla milkshake. She surprises me by drinking a quarter of it, her eyes smiling in approval. I make the mistake of relaxing my guard. Five minutes later, the love affair is over; the milkshake is “terrible.” It’s back to her vanilla Ensure on ice, supplemented with protein powder. We turn our backs to her as we stir it in. An illicit act, borne of necessity.

“If I like it, I eat it,” she says with conviction. The problem is that she no longer likes anything, so she barely eats. Only a small bowl of plain ice cream consistently elicits a positive reaction. Her existence, once crowded with love and life, so full of infinite flavor, is now tightly circumscribed.

“She’s making a choice,” the gerontologist tells us kindly. At her age, and in her condition, there’s very little she can still control. Choosing not to eat, despite a vague understanding that the consequences will be dire, is a decision she makes consciously, and it’s one that we must respect. There will be no force-feeding, no tubes to deliver the nutrients she so badly needs. Now it’s on her terms, and those terms are strictly vanilla.