On those summer nights, after my brother came home from the hospital, he would grab his baseball bat and take one hundred practice swings.

While he was gone, he’d missed a significant number of games, so maybe he wanted to make up for skipped batting practice, or maybe it was something he’d always done and I just hadn’t noticed, but every single night that summer, he took out his bat in the fading summer light to swing. 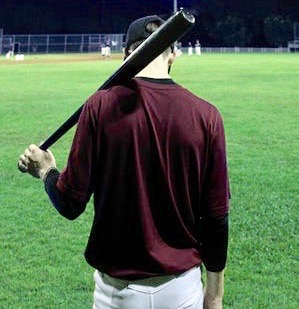 His swings scared me, but not as much as his silence.”

These were not half swings.

The swings he took in the living room were full of power and anger and maybe a little madness. Sometimes, I pictured what would happen if he lost his grip and sent the bat flying across the living room, smashing into furniture and hitting me while I sat on the couch.

There was a green lamp that broke years ago when my brothers were wrestling in the living room. You could still see the repaired cracks. If his bat hit that lamp now, it would be done. Then, there was the corner of the couch where he accidentally made contact last summer. You had to look closely to notice the perfect tear. It didn’t seem possible it was created by my brother’s baseball bat.

His swings scared me, but not as much as his silence.

The violence contained within the motion of that bat would have made more sense if he took to our world with his bat, shattering the silence and destroying the façade of sanity. In that chaos, I might have understood the kind of crazy that came home with my brother from the hospital. Instead, there was the whirl of metal cutting through thin mountain air and the rhythmic rush of his breath.

Usually, there was a ball game on the TV with the volume turned down. I sat in the darkening living room, in the glow of a distant baseball field, half-watching the game, half-watching my brother swing. I watched for a slip or a misstep, for the bat to come hurling from his strong hands.

I didn’t know it, but he was swinging his way back to sanity. He was using all of his power and focus and discipline to stay with us.