Her name, Piedad, meant “piety,” but she wouldn’t give me her blessing for my travels back to the States. The problem, as it turned out, was a technicality.

“Is she Catholic?” the old woman wanted to know. She sat propped against an adobe wall as the dusk settled in.  At the time, she was 99 years old. No one else from her generation remained in Mexico, the generation that had lived through the revolution. All the rest of them were ghosts. 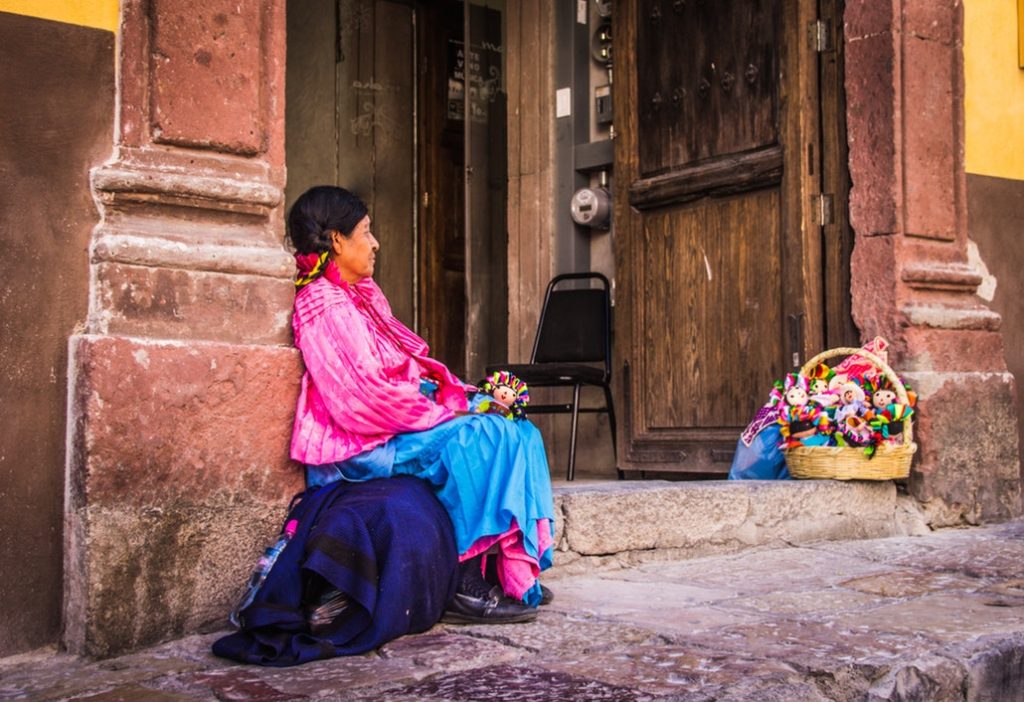 “Was she baptized?” the old woman wanted to know. She shifted against the adobe wall, and I wondered if she might be uncomfortable.”

My friend Patty, the woman’s granddaughter, looked at me. I nodded. Yes, I was. Despite my American accent and my blonde hair and my urban-minded ways, at least there was that — I had grown up Catholic.

“Can she prove it?” the older woman asked.

Patty and I looked at each other. I shrugged. What was I supposed to do? Break into a Hail Mary in Spanish?

“Come on, Abuela,” Patty insisted. “She’s going home — back to the United States. Just give her your blessing. You know, for a safe journey.”

“Was she baptized?” the old woman wanted to know. She shifted against the adobe wall, and I wondered if she might be uncomfortable. But Patty had explained it to me. After a century of rustic living, Piedad refused to live inside a manufactured house, to sit on a sofa, or to use a plumbed bathroom. She preferred her outhouse and her old adobe room, built next to the white-washed cinder-block home that the rest of the family lived in.

But Piedad was not a woman to be persuaded easily — not after a century of hacienda tyrants and revolutionary soldiers and government swindlers, and now whatever it was that the United States was doing now to drive down the corn prices in Mexico. “Where’s your certificate?” she demanded.

I looked at Patty again, and we both bit our lips against laughter. Around us, the night was falling. Already, an orange-tipped moon was rising up over the horizon, past the strawberry fields and the goat pastures and the single low-lying hill across the highway that the townspeople believed still held revolutionary gold buried within it.

“I’ve got to get home to bed soon,” I whispered to Patty. “Maybe we can do this another time.”

But she shook her head. “Abuelita,” Patty insisted, “she left it at home. You know, for safekeeping.”

“En casa?” The old woman balked, and she said to me in Spanish, “What if your home burned down while you were gone?”

Patty’s eyes sparkled with laughter, and I bit my lip again. But maybe, I thought, they were right; maybe I did need some kind of blessing. What would it be like to go home? After nearly a year in this place, I was heading back to my own life in the United States, where roads had stop lights and houses had washing machines. Where I could speak English and drink from a faucet. But Piedad was not impressed. She’d been to the United States — once, yes, years ago — and hadn’t liked it much.

“You should be more careful,” she told me, relenting at last and motioning me toward her for a quick sign of the cross.

“You got something important,” she said. “You better know how to keep it safe.”

Susan V. Meyers has lived and taught in Chile, Costa Rica, and Mexico. She earned an MFA from the University of Minnesota and a PhD from the University of Arizona, and she currently directs the Creative Writing Program at Seattle University. Her fiction and nonfiction have been supported by grants from the Fulbright foundation, the National Endowment for the Humanities, 4Culture, Artist Trust, and the Squaw Valley Community of Writers, as well as several artists residencies. Her novel Failing the Trapezewon the Nilsen Award for a First Novel and the Fiction Attic Press Award for a First Novel, and it was a finalist for the New American Fiction Award. Other work has recently appeared in Per Contra, Calyx, Dogwood, The Portland Review, and The Minnesota Review,and it has twice been nominated for a Pushcart Prize.