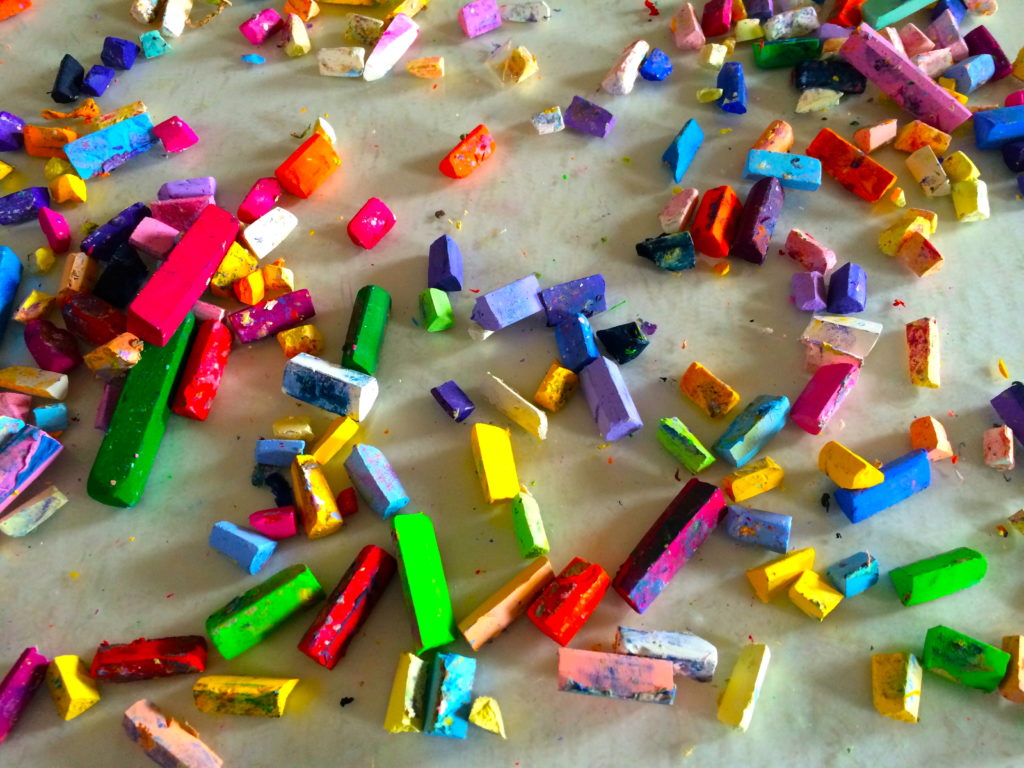 I pull into the park district lot, rain pelting against the windshield, and as usual there are no
spaces available near the building entrance so I make a bee line toward a spot at the far end
where I’ll tuck in next to a hulking black Suburban displaying both a Wisconsin badger logo and
a tiger-striped Princeton decal leading me to wonder if badgers and tigers could coexist, but
meanwhile I inch into the space cautiously because the car flanking my passenger side has its
door propped open as an old man rummages around in the back seat, so I heave my tackle box
filled with oil paint out of the wayback and wrestle with the giant canvas which I have wrapped
in plastic to shield it from weather and prying eyes, but just as I place everything on the wet
pavement in order to dig out the repurposed diaper bag that holds my brushes, rags and
turpenoid, the old man next to me starts talking which is a little disconcerting because I’d really
like to get inside before the wind whips up further and turns my canvas into a sail, but I pause
because my mother always taught me to be kind to strangers unless they were old men in cars,
but this guy isn’t beckoning me near with the promise of a Snickers bar so I wait as he sifts
through his belongings and announces, with his head buried in the trunk, that he’s a little
nervous because he’s never been to an art class before and since I am the only one within
shouting distance I assume the comment is directed at me, so I wait there, bag straps
crisscrossing my body, a cartoon character disappearing beneath a pile of luggage, but I ask
him if he needs help getting oriented and although he just keeps to his running monologue I
take that as a ‘yes’ as the rain begins to drip off the tip of my nose, and when finally, he has
gathered himself and emerges from the depths of the vehicle a little discombobulated but
holding one small box and a large plastic bag, we trudge along side by side heading toward
the building until I veer off the path finding a hidden side door, a shortcut, and prop my body
against the door jam as my companion hobbles into the dry back corridors of the rec center, I
find myself assessing his stamina to see if he can make it up the flight of stairs to the art area
directly above us or should we walk the length of the building to the elevator, but based on his
incessant chatter I judge his lung capacity to be sound and, by extension, the rest of him, so I
encourage him up the stairs while he chats about his dog and his daughter in Cleveland, and
by now we are within spitting distance of our goal and as I throw my body against the last door, I
can feel the pull of the classrooms just a few feet away but my companion is now shouting a
wheezy question as he mounts the stairs, asking me if I like to read which makes me smile, I
hope in a kindly way, as I marvel at how this guy is chock full of non-sequiturs but I reply that
yes, I do like to read, at which point he pauses on the stairs and I fantasize about jettisoning
my hundred pounds of oils and repositioning the diaper bag strap which is threatening to wear
a permanent groove in my shoulder but he is leaning heavily against the handrail while yanking
a book from his plastic bag, and he pulls himself to the top step where he extends his hand
saying here, you might like this and I heft the hardcover copy of Unbroken by Laura Hillenbrand
and say a silent prayer of thanks that he hadn’t handed it off at the base of the stairs, and think
that he should keep this expensive item for himself, but no, he’d received three copies recently
for his birthday, causing me to wonder why so many had deemed it the perfect gift, could it be
his connection to that time period? – and, if so, had I just led a 95-year-old World War Two vet
on a forced march up a flight of stairs just to save myself the interminable walk to the elevator,
so I wince a little not just because I have now lost all feeling in my right arm, but also because I
blame myself for doing what was expedient, but at long last we are standing in the corridor with
the art room doors flung wide in welcome, so I ask him what class he’s taking and usher him to
the threshold and as he enters he turns, making eye contact for the first time, thanking me
for being so kind, as I cradle his book in my arms.

Jane Donaldson grew up in Cambridge, Massachusetts and currently lives in Wilmette IL. This is her first published piece which was written as a response to a one-sentence prompt.