The bus pulled out of the main Teheran station, heading toward Mashhad. It was the early 1970s and the House of Pahlavi still reigned over Iran, so the inside of the bus had Shah Reza’s likeness on several public announcements. His photo was above the driver’s windshield, along with sloppily-cut magazine pages of male body-builders, wrestlers and weight-lifters.

The bus was nearly full and, as far as I could tell, I was the only non-Iranian aboard. 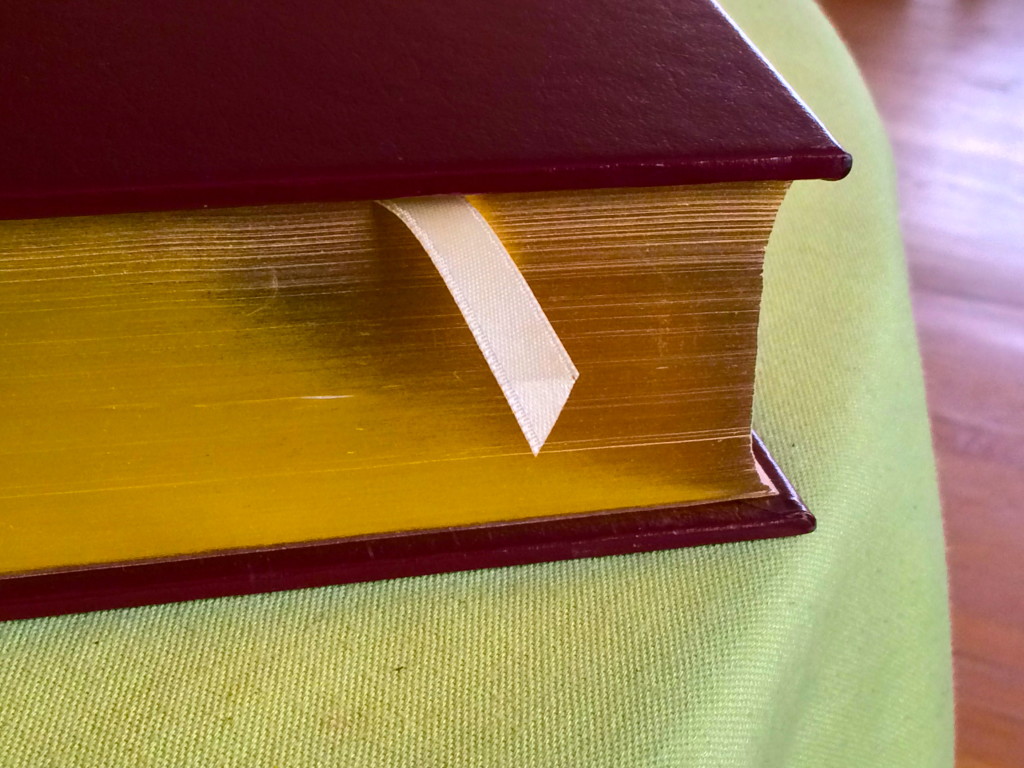 He stared at it for a while, examining the cover, the gilt letters on the front. Then he opened it and leafed through it, back to front.”

For about the first fifteen or twenty minutes of the ride, the man sitting across the aisle from me — dressed like a cleric — led the rest of the bus riders in prayers; I assumed they were beseeching Allah for the safety of the journey. The leader chanted something, and then a response from the entire bus — a captive congregation. The bus riders knew the words and they all participated in distracted rote fashion like a Sunday school class reciting the 23rd Psalm while doodling at the same time. The Muslim back-and-forth on the bus had a familiar rhythm, not unlike the Hebrew prayers at the Orthodox synagogue where, at age thirteen, I’d had my bar mitzvah, after which I vowed never to set foot in another religious building for the rest of this incarnation.

Not only was I adamantly against organized religion, I’d never been a believer in anything. Let me take that back. I believed in one thing: That belief itself was the scourge of the world. Fervent believers scared the bejesus out of me. The bemoses and the bemohammed as well.

The chanting on the Iranian bus continued as traffic became sparser, and by the time the prayer session was over, the landscape was bare, a nearly empty two-lane blacktop in the middle of a scrubby landscape, mountains in the distance, to the north.

While the imam, or whatever he was, led the bus passengers in prayer, I read my bible.

That’s right. In spite of my feelings about organized religion, I carried a pocket-sized King James Bible containing both Old and New Testaments. It was gilt-edged and the print was miniscule but I was young and didn’t need glasses to read it. I don’t remember why I carried it. Maybe because it was small and portable: three inches wide, four and a half high, and less than one inch thick. It had a faux leather cover and a gilt HOLY BIBLE stamped on the front.

So on that bus, surrounded by Muslims, I read the Judeo-Christian bible, and every time I found a passage that amused me, I marked it: “He that is wounded in the stones, or hath his privy member cut off, shall not enter into the congregation of the Lord.” Or: “The Lord will smite thee with the botch of Egypt, and with the emerods, and with the scab, and with the itch, where of thou canst not be healed.”

I had once looked up emerods; they’re hemorrhoids. Touchy, that Judeo-Christian deity. Make Him unhappy and He hits you with scabs, botches, itches and emerods.

I was chuckling to myself when I noticed that the imam across the aisle, the one who’d led the prayers, was trying to get my attention. I gestured, what is it? He pointed his index and middle fingers toward his eyes, then aimed his chubby index finger at my bible. Could he look at it? Why not? I nodded and handed it to him.

He stared at it for a while, examining the cover, the gilt letters on the front. Then he opened it and leafed through it, back to front. Carefully, he examined the gilt edge, running his fingers delicately around it.

He caught my attention again and pointed to the book, then pointed upward with his index finger, toward the roof of the bus. Clearly, he was asking me if this was a holy book, holy to someone. I nodded. He raised his chin and nodded too. Aha! His suspicion was right.

Then he handed the bible back to me.

So. My Judeo-Christian bible had been blessed by a Muslim cleric, used as a sacred object in a private sacrament. I looked at my little bible. It was the same,  but it wasn’t. Not anymore. It seemed to have a different … what? Aura? Vibe?

I opened it at random to Exodus 19:9: “And the Lord said unto Moses, Lo, I come unto thee in a thick cloud, that the people may hear when I speak with thee, and believe thee for ever.”

That’s the biblical passage I turned to. And outside the bus window, to the right, where there was an endless expanse of desert, a thick dust cloud had formed and was moving toward us. Those in the bus knew what was coming and they shut all the windows. We were in for a stuffy, hot ride. Soon, the smell inside the bus was acrid, the odor of fermented milk.

I knew the cloud was perfectly natural at this time of year, and you can twist just about any biblical passage so that it’s pertinent to whatever you’re going through. But still. Did all this mean anything? Was this some sort of message?

Of course not. I wasn’t going to let this event turn me into a believer. No way.

Roberto Loiederman has been a merchant seaman, journalist, and TV scriptwriter. His work was nominated for the Pushcart Prize in 2014 and 2015, and he is co-author of  The Eagle Mutiny www.eaglemutiny.com.

One thought on “The Cloud, the Imam and the Non-Believer”