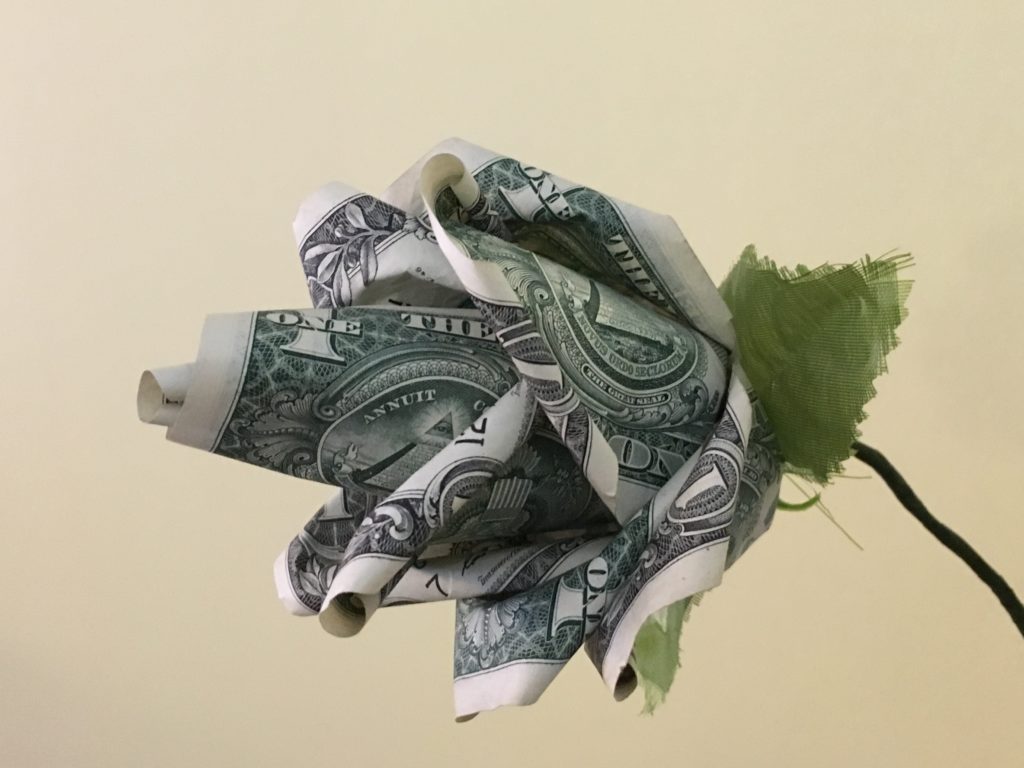 Perhaps the image at the top of this page struck you as it did me when I first saw it by the cash register at my favorite café.

A one-dollar bill (maybe two) shaped into a rose?

Not only is it nicely crafted — see those delicate silken leaves and realistic stem? — it transforms a mundane object into something worth lingering on.

Now that’s what I call art.

About a year after my second child was born, I jumped at the chance for some creative stimulation and a break from mothering by registering for an evening writing class with a well-regarded instructor. Born in India, Molly Daniels, was a small woman with a big personality who wore flowy, multi-colored skirts and headscarves.

One night, she asked us to profile a parent. At the time, I was having difficulty with my father, so my subject sort of self-selected.

I began with, “My father is the tallest of two sons born to a short, stocky German-Jewish father and his four-foot-ten wife who was born and raised in Philadelphia. In college, he majored in philosophy and pursued a life in business and politics.”

As we scribbled in notebooks from desks configured in traditional lines, middle-school classroom style, Molly strolled the aisles, skimming our opening paragraphs, nodding and hhmmming.

When she arrived at my desk, she peered over my sentences and said, “Tell me about your mother.”

“But I wanted to write about my father,” I said. “There’s more drama there.”

“That may be true, but just tell me one thing – one unusual detail – about your mother.”

I struggled to think of something – I was low on sleep from being up at night with my infant daughter – but then, something came.

“My mother grew up in a hotel.”

“Ah!” she said excitedly. “That’s it! You must write about your mother.” And before I could argue, off she strolled to the next desk, her colored scarf billowing wildly behind her.

It was Molly Daniels who taught me about the potency of the well-selected detail and its window into storyline. The ones that come to mind when we first think of a person, the ones we recall long after reading a short passage or an entire book.

The tilt of a character’s eyeglasses. Dandruff on a coat. An arthritic finger.

Between the ages of 9 and 14, my mother would take the elevator down to the hotel dining room, order a bowl of cereal and a peanut butter and jelly sandwich to take to school for lunch and eat. By herself. She was like the children’s storybook character Eloise, the only difference was that she was not at The Plaza in New York City but at a hotel in Pittsburgh. Growing up in a hotel not only impacted her (lack of) kitchen skills – no stove or oven translated into zero chances to watch her mother cook or have recipes handed down – but were likely to have influenced her decorative leanings to something I lovingly call institutionally immaculate – shiny glass-topped furniture on cream-colored carpeting and beds made with hospital corners in a spare and pristine space.

Details that pull us into her storyline.

In my writing workshops, I talk about eight elements of essay, alliteratively referring them as “Ellen’s Eight.”

Each of these elements work hard either by their presence or absence to make a piece sing.

But if I had to choose the two elements that matter most to an initial reading, the two that I look for in essays by my students or submissions for Thread and Stitch, I’d have to say detail and storyline.

That one-dollar bill makes a fine detail in the right context. But sculpted into a rose opens the book cover and yanks me in. I begin to wonder about its story. Who made it? And how? Was it the café’s first earned dollar? Why was it placed by the cash register?

I am reminded of Molly’s lesson in part because I’m teaching a summer writing workshop and I want to elucidate this point for my students. But also because I’m finishing a memoir in which both of my parents make appearances. I am on the hunt for just the right illustrative details that express who they are, in part of course, to invite the reader in and help tell the story.

I’m searching for roses made from dollar bills. Word version. 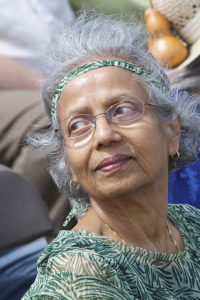 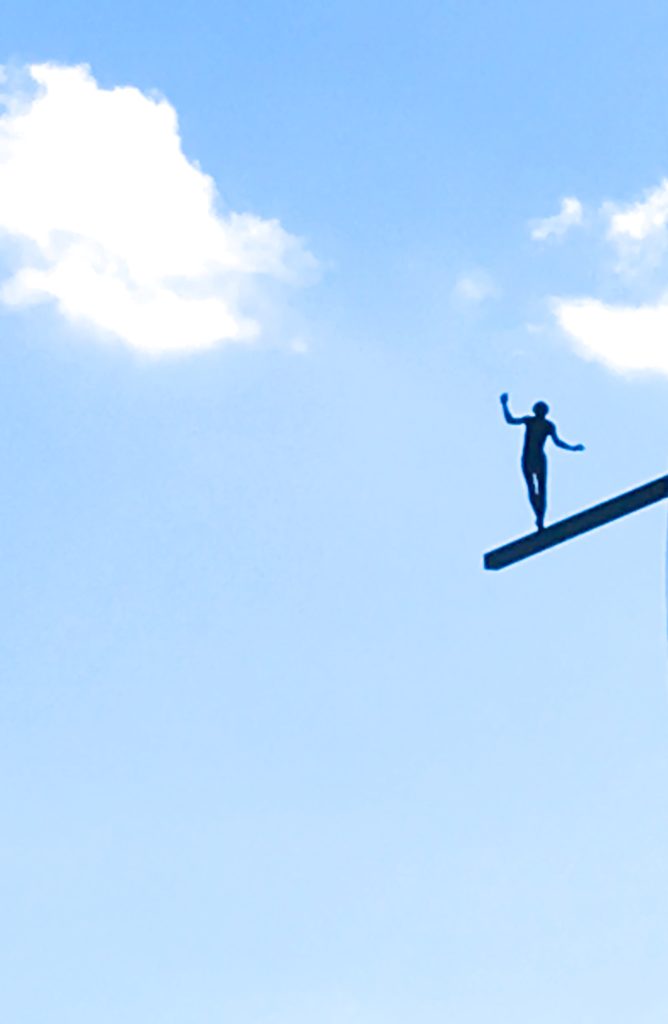 Now that we are nearing the end of the year, the one in which I took an enormous inhale —  twelve months without writing  — I wanted to let you know how the experiment went.

Back in March, I wrote that I was taking a year off from writing anything other than social media and blog posts for three reasons that I was aware of at the time:

Halfway through the year, in May, I posted an update reporting more available time, but that some essential part of me was missing. A few months later, in August, I noted I was reading more. Earlier this month, I indicated that my adventure in not writing had revealed some very surprising, writerly, results.

That should catch you up.

But in the spring, there was a strange and surprising turn of events.

A longtime writing project that I had released the year before, thinking that it was completed, done, fini, drifted over and hung overhead. It moved deftly, left, right, up and down, like a handful of colored balloons in a light wind. They hovered and I swatted at them, hoping to push them away, feeling as if I had carried and nurtured them long enough.  I didn’t want them in my life.

Ah, but they weren’t going anywhere. I felt their presence for many weeks and sometime in late spring, as if they were tired of keeping themselves airborne, they popped, their skins falling right into my lap, into what appeared to be an actual shape.

It knocked me over, this wild and weird gift from above.

In moments, a structure appeared. And then, a title introduced itself. I took dictation, figuring I should at least scribble some notes. But it was more than mere scribbles. The balloon skins moved from flimsy to solidified, and in very short order I had an outline of a book-length memoir containing most of the elements of personal narrative that I teach my students: detail-scene-language-pacing-structure-storyline-voice-theme.

I’m calling the book,  Seven Springs, and – you can’t make this stuff up – I am halfway through a first draft. The process has been extraordinary, like no other I have known, as if the words that hid themselves from me for decades are now available for the plucking.

So I’m feeling a bit sheepish. I went into this thinking I knew myself. I was taking the year off from writing and I now have enough material to get a book proposal into the works. That wasn’t supposed to happen. A memoir was the farthest thing from my mind.

I think giving myself permission not to write made space for my own thoughts and the words of other writers. I tip-toed out on a limb, far from my comfort zone, on my own. My chest expanded and I breathed it all in. My inhale.

Instead of feeling like the wind or the sea that moves my projects  – my life – along, I see this year as the one in which I allowed myself to become a vessel – a receiver – and was gifted with gold.

Earlier this week, I wrote about burning my journals in a what I’ll call a ‘letting go’ ceremony and I received a wide array of responses.

A friend shared that when she told a group of writers that she let go of hers, there was a collective gasp.

Another tells me he understands, but wonders where I found the strength.

Another writes that she is inspired to let go of hers, but that she would keep the one where she meets and falls in love with her husband.

Tears streamed down my daughter’s face when she heard about it. She just couldn’t understand why I would do such a thing.

I spent the week reflecting on these reactions. It seems to me that some of my reasons for letting my diaries go are uniquely connected to writing personal narrative which is process-centered. Present tense oriented. Personal.

But there were other reasons and these were connected to what we keep and why. I found it an interesting exercise to think about what we hang onto and what we easily let go.

(For my writing students in search of a prompt, I urge you to try this one.)

It’s for the following reasons that I was moved to make such a permanent act:

They served their purpose and were taking up physical space in my home and psychic space in my life.

I’m not that girl anymore. (Thank you, Leslie, for the words.)

So much of the content was sullen, whiny or dull and it didn’t feel like good emotional feng shui to have that around.

They were locking me into one storyline.

Like paint palettes or mounds of clay, they weren’t fully formed. The pieces that came out of these found their way into finished work.

And finally, through this ritual, I’ve become aware that:

I’m more interested in writing words that remain true, that stand the test of time; the words that I will, consciously, leave behind.